Media outlets ranging from Newsweek and Time, to National Geographic and even the Weather Channel, all recently ran articles on the so-called “Overshoot Day,” which is defined by its official website as the day of the year

when humanity’s annual demand for the goods and services that our land and seas can provide—fruits and vegetables, meat, fish, wood, cotton for clothing, andcarbon dioxide absorption—exceeds what Earth’s ecosystems can renew in a year.

This year, the world allegedly reached the Overshoot Day on August 13th. Overshoot Day’s proponents claim that, having used up our ecological “budget” for the year and entered into “deficit spending,” all consumption after August 13th is unsustainable. Let’s look at the data concerning resources that, according to Overshoot Day’s definition, we are consuming unsustainably. (We’ll leave aside carbon dioxide absorption—as that issue is more complex—and focus on all the other resources). 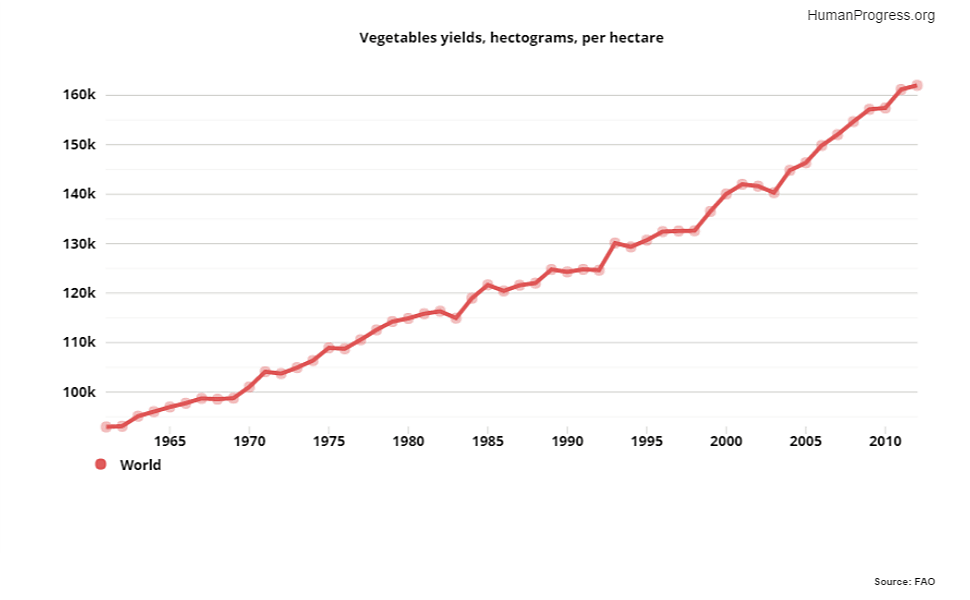 As people in developing countries grow richer, they consume more protein (i.e., meat). The supply of meat and fish per person is rising to meet the increased demand, just as with fruits and vegetables. Overall dietary supply adequacy is, therefore, increasing.

It is true that the world is losing forest area, but there is cause for optimism. The United States has more forest area today than it did in 1990. As Ronald Bailey says in his new book The End of Doom, “In fact, except in the cases of India and Brazil, globally the forests of the world have increased by about 2 percent since 1990.” As the people of India and Brazil grow wealthier and as new forest-sparing technologies spread, those countries will likely follow suit. To quote Jesse H. Ausubel, Director of the Program for the Human Environment at The Rockefeller University and HumanProgress.org Advisory Board member:

Fortunately, the twentieth century witnessed the start of a "Great Restoration" of the world's forests. Efficient farmers and foresters are learning to spare forestland by growing more food and fiber in ever-smaller areas. Meanwhile, increased use of metals, plastics, and electricity has eased the need for timber. And recycling has cut the amount of virgin wood pulped into paper. Although the size and wealth of the human population has shot up, the area of farm and forestland that must be dedicated to feed, heat, and house this population is shrinking. Slowly, trees can return to the liberated land.

Cotton yields are also increasing—as is the case with so many other crops. Not only does this mean that we will not “run out” of cotton (as the Overshoot Day proponents might have you believe), but it also means consumers can buy cheaper clothing. Please consider the graph below, showing U.S. cotton yields rising and cotton prices falling. 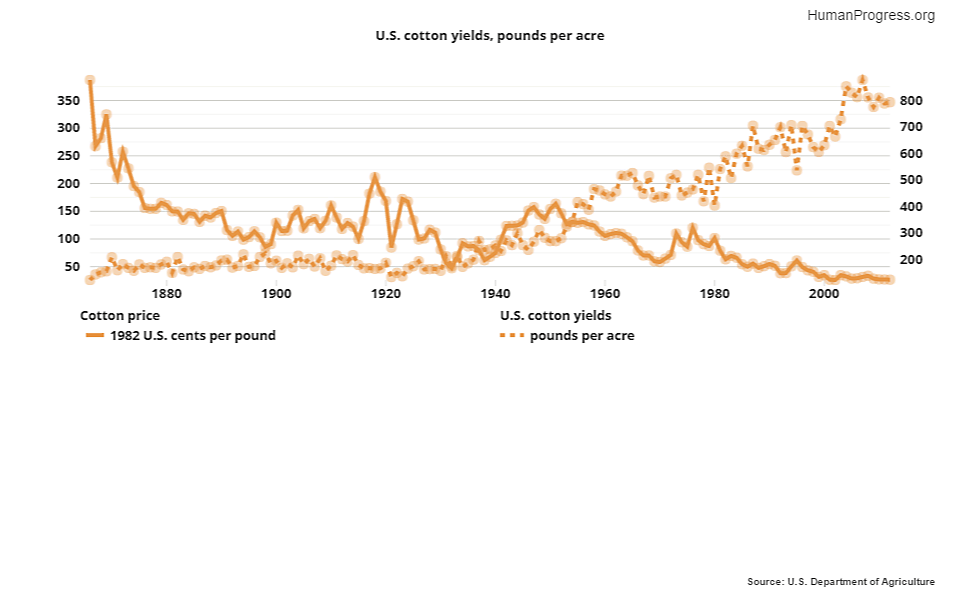 While it is true that humankind is consuming more, innovations such as GMOs and synthetic fertilizers are also allowing us to produce more. Predictions of natural resource depletion are not new. Consider the famous bet between the environmentalist Paul Ehrlich and economist Julian Simon: Ehrlich bet that the prices of five essential metals would rise as the metals became scarcer, exhausted by the needs of a growing population. Simon bet that human ingenuity would rise to the challenge of growing demand, and that the metals would decrease in price over time. Simon and human ingenuity won in the end. (Later, the prices of many metals and minerals did increase, as rapidly developing countries drove up demand, but those prices are starting to come back down again). To date, humankind has never exhausted a single natural resource. To learn more about why predictions of doom are often exaggerated, consider watching Cato’s recent book forum, The End of Doom.