As Republicans unveiled their tax reform plan last week, President Trump said, “We will cut taxes tremendously for the middle class.” Trump advisor Gary Cohn said, “We are giving tax cuts to middle‐ and lower‐​income Americans.” And House Speaker Paul Ryan said, “The entire purpose of this is to lower middle‐​class taxes.”


The problem is that “middle‐​class” Americans pay little in federal income taxes, while “lower‐​income” Americans pay virtually nothing. So Republican leaders are making promises that will be difficult to keep, and they are distracting themselves from the better message of growth and prosperity for all.


The chart below, based on CBO data for 2013, shows average federal income tax rates by income quintile. The highest‐​earning fifth of households paid 15.5 percent of their income to taxes, on average. The bottom two groups paid less than nothing, on average, because the refundable EITC and child credit wiped out their liabilities and gave them a subsidy. And the middle‐​income group that Trump, Cohn, and Ryan are talking about paid just 2.6 percent, on average.


The CBO uses a broad definition of “income” in these calculations, which inflates the denominators here and reduces the measured tax rates. Nonetheless, the data indicate who needs income‐​tax relief, and it is not the bottom three groups.


More important, dividing Americans into “classes” is the wrong way to go. Instead, Republicans should focus their tax reform talking points on economic expansion, business investment, entrepreneurship, job opportunities, wage growth, simplification, and international competitiveness. The Republican tax framework would advance all those goals, and thus benefit every American.


GOP leaders should leave the class struggle to the other party, and focus on how tax reform would support durable economic growth for the nation and broad‐​based prosperity. 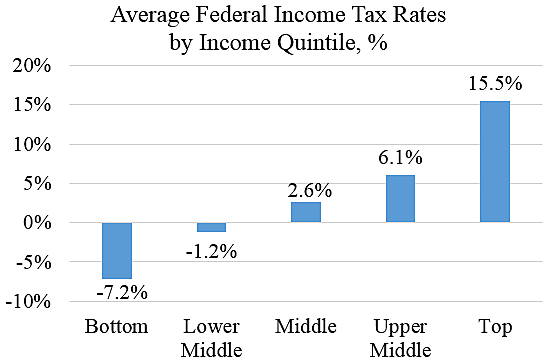