Over Half of Foreclosures Now ‘Repeats’

A fundamental question with both the Bush and Obama approaches to the mortgage foreclosure crisis is to what extent are policies simply putting off the inevitable? Are “permanent” solutions being offered, or are we just recycling the same borrowers through one foreclosure after another? Recent data from Lender Processing Services (LPS) sheds some light on the question.


The most recent LPS data, covering to the end of August 2012, shows that for the first time, over half of foreclosures are for borrowers that were previously in foreclosure. Now there are several ways to read the chart below. On one hand, first‐​time‐​ever foreclosures are at their lowest levels since 2008, and in fact have been on a steady decline since the middle of 2009. That is good news. The pipeline of new foreclosures is decreasing, a reflection of both improving labor and housing markets (or at least not getting a lot worse). The bad news is that foreclosures are increasing because of the same borrowers who have been delinquent for years. I was recently told that the average time to foreclosure for Chicago, for instance, is over 1,000 days. The LPS data also highlight that the largest increase in repeat foreclosures has been in states that use a judicial foreclosure process, providing further evidence that such a process generally does not change the final outcome, but simply delays it. 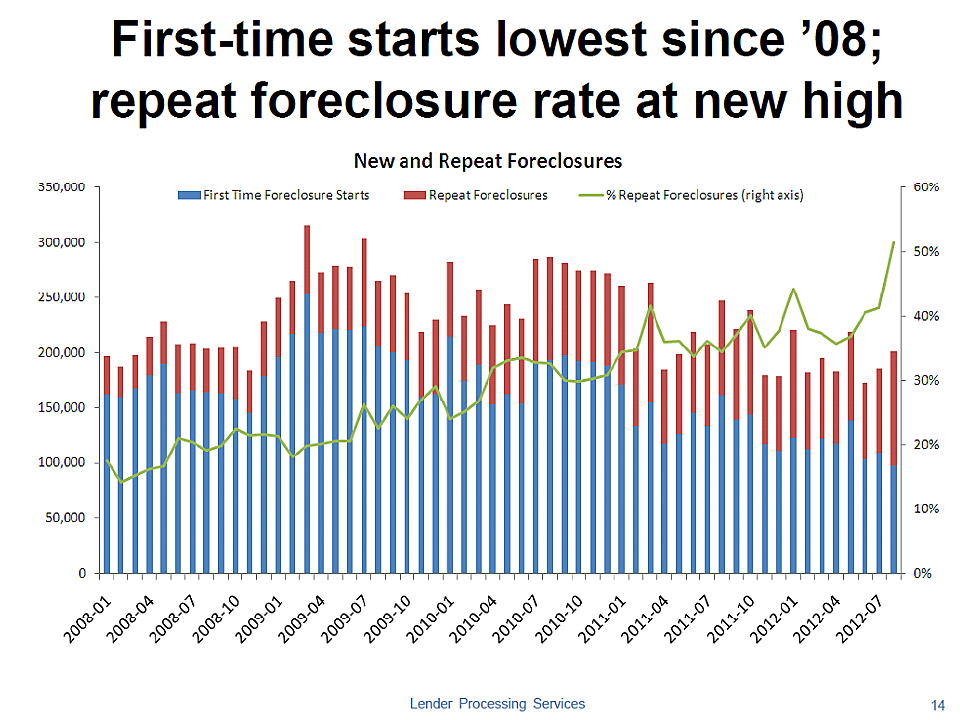 If there is one policy lesson we should take away from the foreclosure crisis, it is that delaying the inevitable makes the problem worse. Had these borrowers finished the foreclosure process the first time around, housing prices would have adjusted quicker and the housing market would have been on the road to recovery quicker. These families also would not have been stuck in “limbo” and would have been able to move on with their lives. While some have argued that delaying these adjustments was appropriate, it is far from clear to me that longer periods operating under “false” prices will lead to better market outcomes.