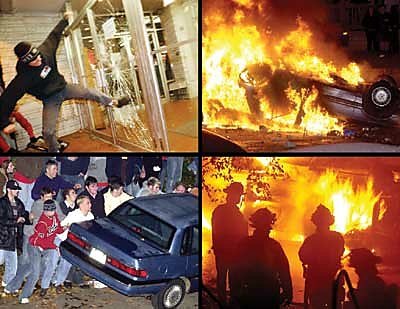 As I mentioned a few days ago, today is the “Day of Action” in California — and, it turns out, elsewhere — when college students and just general protectors of public schooling are supposed to take to the streets and demand that taxpayers fork over not one less red cent to students and schools.


Ironically, the mindless, property‐​destroying, absurd goings‐​on that have surrounded past such demonstrations in Cali — and are already in evidence today – brilliantly illustrate one major reason we need to cut higher education subsidies, not increase them. Clearly, too many college students have both far too much time on their hands, and far too little self control, to justify spending hard‐​earned taxpayer dough on their “education.”


But at least the ostensible motivation behind recreational rioting in California has been slightly related to a principle — namely, the principle that taxpayers owe students stuff. That’s actually a better excuse for taking to the streets than what set off last night’s student riots in College Park, Maryland: a victory in a basketball game. (To be fair, University of Maryland students also riot after losses – they’re no fair weather fans!)


And to think — one of the reasons we’re supposed to support massive subsidies for students is that it serves the common good. Go figure.