Osborne Risks a Triple‐​Dip for the UK

U.K. Chancellor of the Exchequer George Osborne has resumed his saber‐​rattling over raising capital requirements for British banks. Most recently, Osborne has fixated on alleged problems with banks’ risk‐​weighting metrics that, according to him, have left banks undercapitalized. Regardless of Osborne’s rationale, this is just the latest wave in a five‐​year assault on the U.K. banking system – one which has had disastrous effects on the country’s money supply. The initial rounds of capital hikes took their toll on the British economy – in the form of a double‐​dip recession. Now, Osborne appears poised to light the fuse on a triple‐​dip recession.


Even before the Conservative, Osborne, took the reins of Her Majesty’s Treasury, hiking capital requirements on banks was in vogue among British regulators. Indeed, it was under Gordon Brown’s Labour government, in late 2007, that this wrong‐​headed idea took off.


In the aftermath of his government’s bungling of the Northern Rock crisis, Gordon Brown – along with his fellow members of the political chattering classes in the U.K. – turned his crosshairs on the banks, touting “recapitalization” as the only way to make banks “safer” and prevent future bailouts.


It turns out that Mr. Brown attracted many like‐​minded souls, including the central bankers who endorsed Basel III, which mandates higher capital‐​asset ratios for banks. In response to Basel III, banks have shrunk their loan books and dramatically increased their cash and government securities positions, which are viewed under Basel as “risk‐​free,” requiring no capital backing. By contrast, loans, mortgages, etc. are “risk‐​weighted” – meaning banks are required by law to back them with capital. This makes risk‐​weighted assets more “expensive” for a bank to hold on its balance sheet, giving banks an incentive to lend less as capital requirements are increased.


Five years later, Osborne is attempting to ratchet up the weights on these assets. Indeed, he is taking another whack at banks’ balance sheets – and the result will be the same as when the U.K. Financial Services Authority first took aim at the banking system (under Gordon Brown). As the accompanying chart shows, the first round of capital requirement hikes (in 2008) dealt a devastating blow to the U.K. money supply. Indeed, it tightened the noose on the supply of bank money – the portion of the total money supply produced by the banking system, through deposit creation. 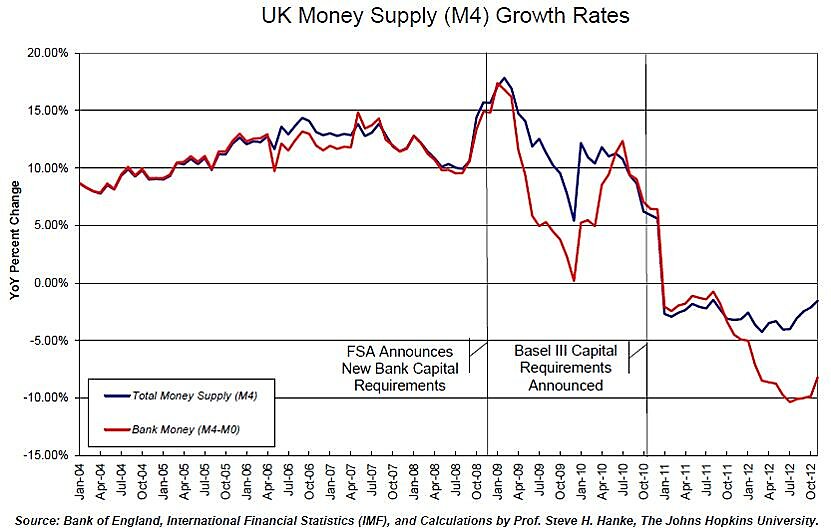 Not surprisingly, this sent the British economy spiraling into its first recessionary dip. The second hit to the money supply came shortly after the Bank for International Settlements announced the imposition of capital hikes under the Basel III accords, in October 2010. Despite numerous infusions of state money (reserve money) via the Bank of England’s quantitative easing schemes, these first two squeezes on bank money have put the squeeze on the U.K.’s total money supply.


This is the case because state money makes up only 16.3% of the U.K.’s total money supply. The remaining 83.7% of the money supply is made up of bank money. In consequence, the Bank of England would have to undertake a massive expansion of state money, via quantitative easing, to offset the U.K.’s bank money squeeze.


It is doubtful, however, that the British pound sterling would be able to withstand such a move. Indeed, there are more storm clouds brewing over Threadneedle Street. The sterling recently touched a 15‐​month low against the euro, and it has fallen 8% against the euro since late July. For the time being, at least, the pound’s tenuous position will likely put a constraint on any further significant expansion of state money, through quantitative easing. It appears markets simply wouldn’t tolerate it.


Accordingly, the only viable option to jumpstart the faltering U.K. economy is to release the banking system from the grips of the government‐​imposed bank‐​money squeeze. Alas, Osborne’s most recent initiative on bank recapitalization goes in exactly the wrong direction.