The Tax Cuts and Jobs Act of 2017 created special‐​interest tax breaks called “Opportunity Zones.” The law empowered governors and U.S. Treasury officials to carve up every state in the nation into winner and loser areas. Investment projects in the winner areas receive capital gains tax breaks, while projects in the loser areas get the short end of the stick.


The Wall Street Journal reports that former casino head Steve Wynn lobbied Trump Treasury officials to fiddle with O‐​Zone regulations to favor his investments. Apparently, the Treasury did not go along, but the episode shows how narrow tax breaks fuel the lobbying industry in Washington.


Looking ahead, every jurisdiction located just outside the nation’s 8,700 O‐​Zones has an incentive to hire lobbyists to pressure governors, federal officials, and members of Congress to redraw the lines and put them in the winner’s circle. Thus, I am guessing that the lobbying and corruption created by O‐​Zones has only just begun. A better alternative is to reduce capital gains tax rates across the board.


Here is the WSJ reporting:

Former casino executive Steve Wynn generated $2.1 billion and a big potential tax bill last March when he was forced to sell his stake in Wynn Resorts Ltd. after sexual‐​misconduct allegations. Less than three months later, he held a meeting with Treasury Department officials as they were writing regulations for a new tax incentive that had the potential to help him defer and reduce those taxes.


Mr. Wynn met with senior Treasury officials on June 4 to discuss “opportunity zones,” a break that was part of the 2017 Republican tax overhaul. The opportunity‐​zone program gives individuals a chance to defer and reduce capital‐​gains taxes if they make investments into low‐​income areas.


Mr. Wynn, who left his company and a Republican National Committee position early last year after being accused of sexual misconduct by former casino employees, attended the meeting in the Treasury building with Daniel Kowalski, a counselor to Treasury Secretary Steven Mnuchin who was helping write opportunity‐​zone regulations. Mr. Mnuchin stopped by the meeting to greet Mr. Wynn, according to a copy of the secretary’s calendar that the department periodically releases. 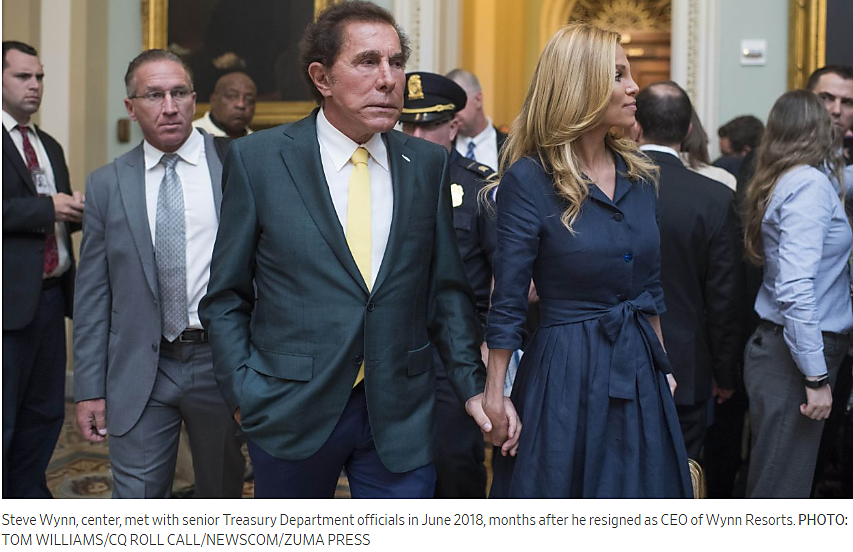 Here are other commentaries on O‐​Zones: