For example, last year a Reason‐​Rupe survey asked respondents about laws forcing insurers to cover the sick. What made this poll interesting is that it was the first poll in 18 years to ask respondents to weigh the costs of such laws against the benefits. The below graph (from my latest Cato paper, “50 Vetoes”) displays the results. 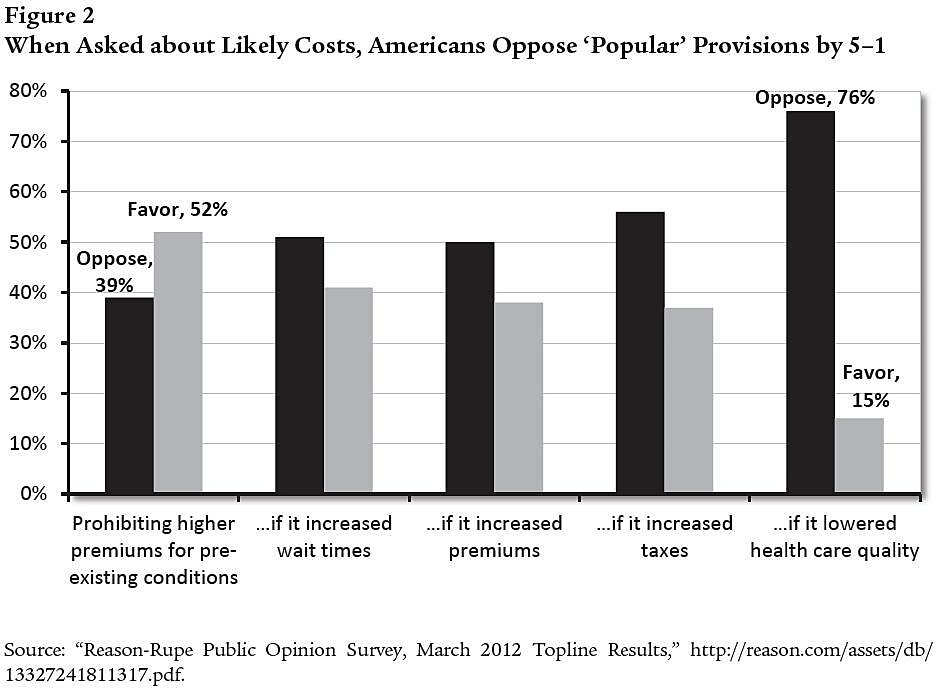 Reducing the quality of care is actually the most likely negative effect of banning higher premiums for people with pre‐​existing conditions. (Don’t take my word for it. The authors of the law knew those provisions reduce the quality of care, and so included an awful lot of regulations that they hope will prevent that from happening.) When people learn about this negative effect, they oppose those provisions by a ratio of five to one. Greater public understanding of ObamaCare increases public opposition to the law.

Obamacare can have a hard implementation in 2014, but President Obama isn’t going to repeal it or even lose reelection over it (though congressional Democrats might).

If he means there is no way the law will make things so bad that Obama would have to repeal it, I again think he doesn’t understand the law itself or the challenges of imposing a law like this on a hostile public. I cannot predict that President Obama will repeal his own signature domestic‐​policy achievement. Indeed, the odds are against it. But we cannot rule it out, and I have already predicted the president will at least sign major revisions to this law before he leaves office.


Where I agree with Klein is when he predicts that ObamaCare will become much harder to repeal if people (in particular the health care industry) get hooked on the trillions of dollars of new taxpayer subsidies that begin to flow in 2014:

My guess is the law’s top‐​line polling will change a bit, but the bigger change will be that the intensity of its supporters will come to match that of its detractors. All of a sudden, a lot of people will have something to lose if Obamacare is ever repealed.

It’s worth noting that this isn’t an argument that ObamaCare will survive because it’s a good law, but because people will be dependent on it.