One of Many Ways the SEC Contributed to the Financial Crisis

I was recently reminded that in its infinite wisdom, the Securities and Exchange Commission (SEC) actually sued banks as the housing bubble was building for putting aside too much money to coverage potential loan losses. It seems that while many banks were worried that bubble lending could turn out bad, the SEC felt that recent history did not offer banks enough justification for setting aside such funding (after all housing prices were going up). The most significant example was the SEC suit against SunTrust. In November 2004 the SEC actually pushed SunTrust to fire its Chief Risk Officer for setting aside too much to cover bad loans, while also pushing SunTrust to reduce its loan loss reserves.


The worst part is that the rest of the banking industry clearly got the message. Before the SEC’s attacks on SunTrust, commercial banks held loan loss reserves, as a percent of total loans, equal to 1.67% (in 2003 Q1), by the peak of the housing bubble that was down to 1.07% (in 2006 Q4), a decline of over 50 percent. While I don’t mean to exaggerate the impact of this change, had banks kept their loan loss reserves at pre‐​SunTrust levels, there would have only been about $30 billion more to absorb losses, I do believe this illustrates just how clueless the financial regulators were as to the risks building behind the housing bubble. And we are being asked, via Dodd‐​Frank, to give this same SEC lots more discretionary authority in the vain hope that maybe next time they might get it right? 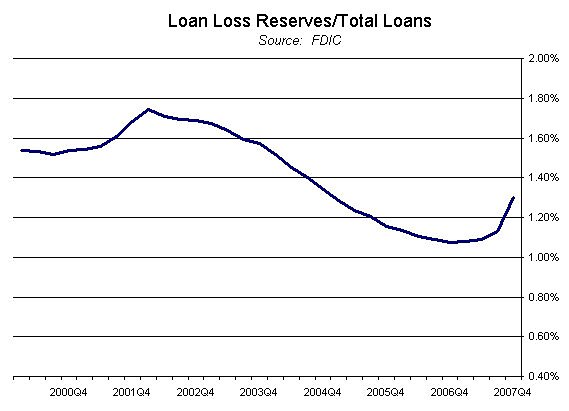