That’s a striking bit of data included in new CBO budget projections. America has already grayed, but it’s nothing like what’s ahead. The number of old folks is going to soar over the next 20 years. The chart below shows that the ratio of oldsters (age 65+) to youngsters (age 20 to 64) is rising from 1‐​to‐​5 to more than 1‐​to‐​3. Is America ready for that radical shift?


The federal budget isn’t ready. Politicians have failed to reform oldster subsidy programs, with the sad result that the livelihoods of youngsters will be dragged down by an anchor of debt and taxes. The first, third, and fourth largest federal programs (Social Security, Medicare, Medicaid) transfer vast and increasing resources from young taxpayers to old retirees. There’s no justice in that, and social tensions will rise as the unfairness becomes ever more obvious in coming years. 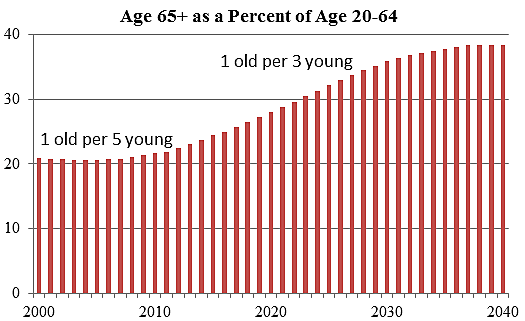