As the price of crude oil continues its downward tumble towards $80 per barrel, I am reminded of a similar scenario from near the end of the Cold War in the 1980s. When Saudi Arabia announced in 1985 that protecting oil prices was no longer its main priority, oil production surged and prices fell off a cliff, briefly plunging below $10 per barrel, as I had correctly predicted.


Lower prices delivered a fatal blow to the Soviet economy, which ended up seeing $20 billion per year in oil revenues evaporate. The resulting fiscal shortfalls proved to be a dagger in the heart of the U.S.S.R.


On October 1st of this year, Saudi Arabia’s national oil company announced that it had abandoned a policy of price protection and would start to focus on protecting its market share. Combined with falling global demand and rising supplies elsewhere, oil prices have fallen accordingly. This has put a squeeze on eight of the world’s top oil producers. States like Iran, Venezuela, and Iraq can only balance their current budgets at oil prices ranging from $110 to $135 per barrel (so‐​called break‐​even prices).


If oil prices stay below $90 per barrel for any length of time, we will witness massive fiscal squeezes and regime changes in one or more of the following countries: Iran, Bahrain, Ecuador, Venezuela, Algeria, Nigeria, Iraq, or Libya. It will be a movie we have seen before. 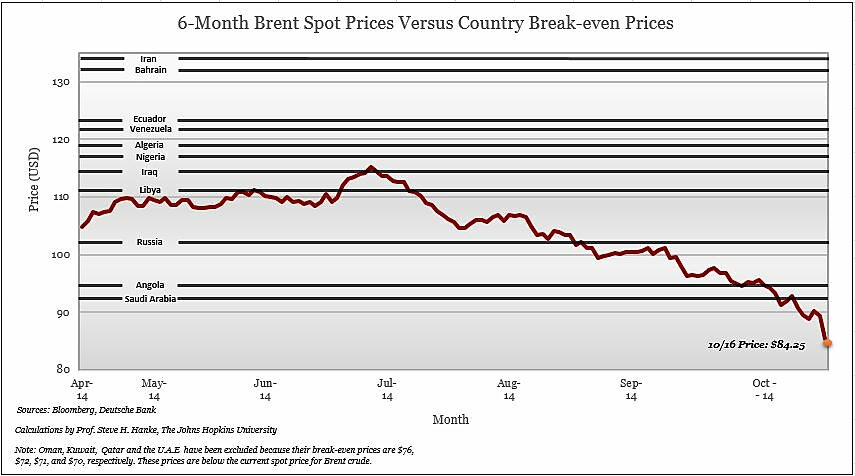