Oh Shenandoah, I Long to See You… 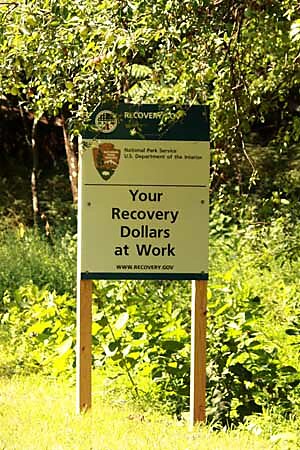 …but I can’t because of Obama!


That takeoff of the lyrics from the famous folksong “Oh Shenandoah” are the impromptu creation of my wife, who this weekend was as appalled as I was when we packed the kids into the car, headed into the Shenandoah National Park, and were greeted by closed overlook after closed overlook accompanied by the sign pictured to the right. Apparently, one project funded by the so‐​called “stimulus” includes simultaneously renovating — or at least cordoning off — every overlook north of the park’s Thornton Gap entrance without posting any clear warning that that’s the case as visitors decide whether to head north or south.


Even more upsetting was being subjected to pure propaganda in the park’s visitor guide, which reports the following on the page “Shenandoah Looks to the Future”:

Some of the treasured resources in Shenandoah National Park are being enhanced through the American Recovery and Reinvestment Act. On February 17, 2009, President Obama signed into law this unprecedented act to jumpstart a failing United States economy. The goal is to put Americans to work while investing in infrastructure for the future.

It’s bad enough to have to see “Recov​ery​.gov” after “Recov​ery​.gov” sign informing you that the views you actually came to see — and for which you paid a $15 entrance fee, I might add — have been put off limits. But is it really too much to ask that people be able to visit national parks without being subjected to propaganda clearly designed to glorify the highly debatable policies of a sitting — and likely to run for reelection — president?


I sure hope not, because no matter which part of the political spectrum you occupy, wouldn’t it be nice to be able to get away from politics for a while?