President Obama is apparently planning to freeze a portion of federal spending for three years. The portion to be frozen is discretionary spending less spending on defense, homeland security, and veteran’s affairs. That portion of spending–about 13 percent of the overall budget–would be held to $447 billion between FY2010 and FY2012.


The chart puts the freeze in context by illustrating the recent growth in this portion of the federal budget. The data is in “budget authority,” which is the amount of new spending authorized each year. Note that a portion of that authorized spending usually splashes over into subsequent years. 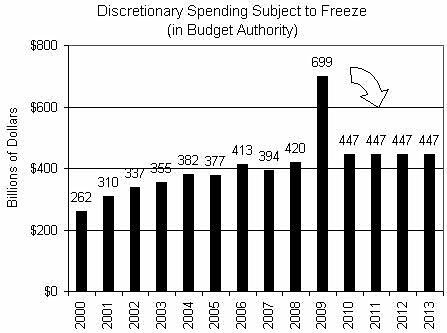 The first thing to note is that the portion of the budget to be frozen grew 60 percent between 2000 and 2008, during a period of low inflation. And since this portion of spending excludes defense, homeland security, and veterans affairs, it has nothing to do with the reponse to 9/11 or various foreign wars.


Then comes 2009 and the massive “stimulus” bill, which pushed up spending on this part of the budget to $699 billion. Finally, the figure shows the freeze at $447 billion, which is 71 percent higher than the level of authorized spending in 2000.


Here’s the important point: a very large part of the 2009 spending spike of $699 billion will be sloshing forward into 2010 and later years. (As illustrated by my fancy arrow in the chart). The new CBO budget estimates (Table A-1) show that only 18 percent of authorized stimulus funding will be spent in 2009, with the rest sloshing forward.


Obama is “freezing” the budget only because he already has a large amount of cash floating around from the stimulus bill that he can spend on all his favorite big government projects in 2010 and beyond. In budget‐​speak, federal spending measured in “outlays” will be far from frozen.


Finally, a president’s proposals for discretionary spending beyond the current budget year are meaningless. Obama will be back with a new budget in February 2011, no doubt with a whole new set of assumptions and priorities.