I have two complaints about the President’s Nobel Prize acceptance speech, one factual, one theoretical. The first concerns his repetition of the common claim that we live in a world of growing instability and civil war. The president said:

The resurgence of ethnic or sectarian conflicts; the growth of secessionist movements, insurgencies, and failed states — all these things have increasingly trapped civilians in unending chaos.

Truth requires changing “increasingly” to “decreasingly.” Andrew Mack’s Human Security Brief makes the point. The chart below shows that civil war (intrastate war) — what Obama is talking about here — has become less common over the last several decades. Elsewhere in the report, you can also see that civil war now kills far fewer people than it used to. 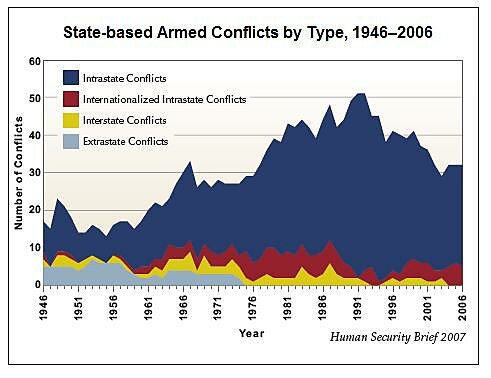 My second gripe is Obama’s failure to acknowledge that peace is a value that competes with others. Human beings get along not by reconciling all differences but by tolerating them. Nations avoid war by accepting the small dangers others pose rather than making larger dangers by trying to achieve total safety. If the United States had sacrificed its desire to promote anti‐​communism and free trade and contain Communism in Korea in 1950, as we did Eastern Europe, we could have avoided the Korean War. By accepting some risk from Iranian nuclear weapons, we avoid preventive war. We keep the peace with Sudan because we do not enforce humanitarian norms in Darfur. We could overthrow the government of Zimbabwe or North Korea and save people from disease and starvation. But we prefer peace. Pakistan undermines its uneasy peace with India because it wants Kashmir back. Israel does something similar in the West Bank.


However one judges these choices, it is important to recognize them as such. Rightful winners of peace prizes are people who sacrificed something important to avoid war, or at least advocated doing so.


It isn’t surprising that the President, given his job, would celebrate the morality of American military hegemony and disregard arguments that it isn’t a source of peace. It was predictable that he would defend the idea that peace in the long term often requires sacrificing it in the short, as we are fighting two wars in the name of stability. What got me was that he failed to mention that peace also requires sacrifice.


To the extent a message unites the speech, it is this: All good things go together. We do not have to choose peace at the expense of U.S. military activism, democracy, justice, or economic development abroad — they all serve that end. The President basically defined peace as a world rid of poverty and injustice. He said, for example, that peace within states is not durable without the sense of justice provided by liberal ideology, because autocratic government causes unrest and violence. Aside from the creative use of history, what’s remarkable here is the failure to acknowledge that maintaining peace with autocracies is usually virtuous but tragic.