In a speech this week, President Obama called for an expansion of Social Security, saying “it’s time we finally made Social Security more generous, and increased its benefits.” Obama was undoubtedly influenced  to some degree by the developments in the Democratic primary, where both Bernie Sanders and Hillary Clinton have expressed support for some form of expansion.  This represents a reversal in part for Obama. While he had always supported increasing payroll taxes on higher-earning Americans, he had also previously supported a change in the way benefits were adjusted each year that would have reduced the growth rate of benefits over a long timeframe in the interest of improving the program’s fiscal trajectory. Social Security’s long-term oultook has only gotten worse in the intervening years, but in his speech he signalled that he no longer believed “all options were on the table” to address solvency concerns  and instead supports further expansion. This reversal is misguided. If his favored reforms are implemented it will increase the economic distortions introduced by Social Security and do nothing to address its serious fiscal problems.  The more likely result is that with this retrenchment, policymakers will continue to make promises but fail to actually do anything. Younger workers will bear the brunt of the cost resulting from failures to put forward constructive reform.

Inexorable demographic changes and the program’s structure mean that today’s younger workers were already going to get a worse deal from Social Security than previous generations. As work from C. Eugene Steuerle and Caleb Quakenbush has shown, a married-couple both earning the average wage retiring in 1960 received more than seven dollars in benefits for each dollar it paid in taxes over their lifetime. A similar couple reaching age 65 in 1980 received roughly $2.60in benefits for each dollar contributed, and a couple retiring in 2030 will receive about $1.12 for each dollar paid into the program. As they note, this ratio probably overstates how good a deal future retirees will get as it does not incorporate the reforms needed to pay scheduled benefits, so that couple that is currently in their 50s could end up having to pay more in taxes or taking a substantial benefit cut. 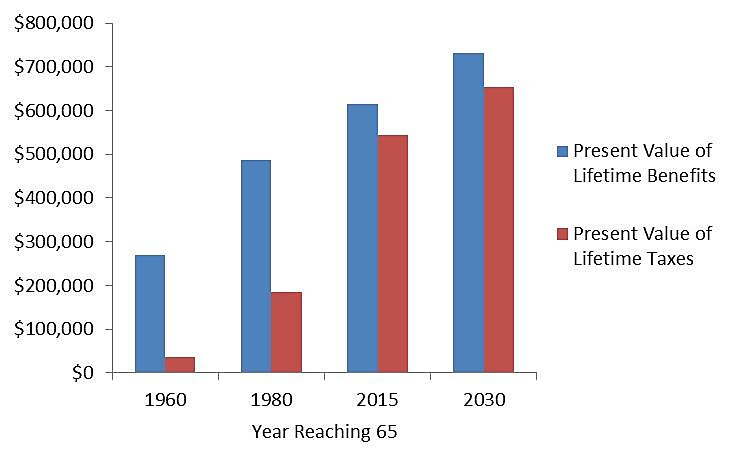 Given that neither Hillary Clinton nor Donald Trump are likely to make any substantive reforms to improve the program’s fiscal trajectory, she has expressed support for some form of expansion and he has promised to protect old-age entitlements from any kind of cuts, it is likely policymakers will continue to kick that can further down the road and closer to the trust fund exhaustion date in 2034. The longer these reforms are delayed, the larger the required reforms become. In order to make the program solvent through the 75-year projection period, scheduled benefits would have to be cut by 16.4 percent for all current and future beneficiaries. If policymakers delay until 2034, scheduled benefits would have to be by 21 percent, with these reductions increasing in later decades. 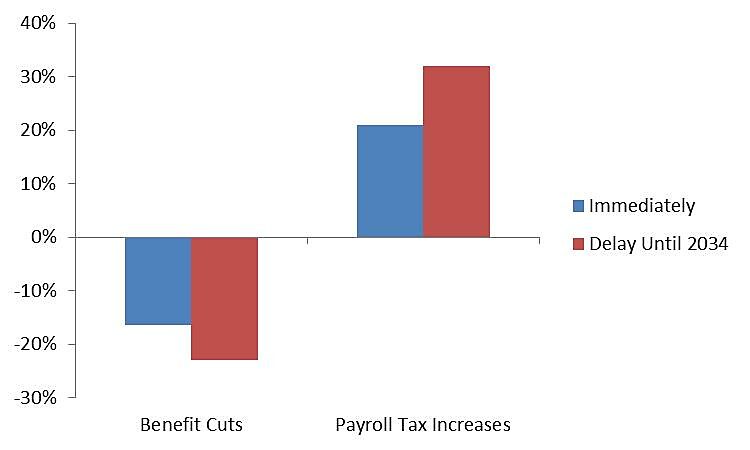 Source: Social Security Administration, The 2015 Annual Report of the Board of Trustees of the Federal Old-Age and Survivors Insurance and Federal Disability Insurance Trust Funds, July 2015, p. 25.

Recent experience has shown that even would-be reformers have expressed a reluctance to make any changes that would affect current retirees, and if this continues it would make addressing the program’s significant unfunded obligations more difficult. Even completely eliminating benefits for those newly eligible in 2034 would not be enough to enable the program to pay out all scheduled benefits in that year. Perhaps it is not surprising that almost two-thirds of people 18 to 29 think Social Security will be unable to pay them benefits when they retire.

President Obama’s reversal is misguided, and will make it harder to enact Social Security reforms that would actually begin to address the program’s issues. Younger workers will bear the burden of policymakers’ reticence to put forward constructive reforms, and they have shown that they are skeptical of Social Security promises made by politicians.