This morning the Obama Administration officially released its proposal for reauthorizing the Elementary and Secondary Education Act (aka, No Child Left Behind). The proposal is a mixed bag, and still one with a gaping hole in the bottom.


Among some generally positive things, the proposal would eliminate NCLB’s ridiculous annual‐​yearly‐​progress and “proficiency” requirements, which have driven states to constantly change standards and tests to avoid having to help students achieve real proficiency. It would also end many of the myriad, wasteful categorical programs that infest the ESEA, though it’s a pipedream to think members of Congress will actually give up all of their pet, vote‐​buying programs.


On the negative side of the register, the proposed reauthorization would force all states to either sign onto national mathematics and language‐​arts standards, or get a state college to certify their standards as “college and career ready.” It would also set a goal of all students being college and career ready by 2020. But setting a single, national standard makes no logical sense because all kids have different needs and abilities; no one curriculum will ever optimally serve but a tiny minority of students.


Also, on the (VERY) negative side of the register, Obama’s budget proposal would increase ESEA spending by $3 billion from last year — for a total of $28.1 billion — to pay for all of the ESEA reauthorization’s promises of incentives and rewards. That’s $3 billion more that the utterly irresponsible spenders in Washington simply do not have, and that would do nothing to improve outcomes.


Even if this proposal were loaded with nothing but smart, tough ideas, it would ultimately fail for the same reason that top‐​down control of government schools has failed for decades. Teachers, administrators, and education bureaucrats make their livelihoods from public schooling, and hence spend more time and money on education lobbying and politicking than anyone else. That makes them by far the most powerful forces in public schooling, and what they want for themselves is what we’d all want in their place if we could get it: lots of money and no accountability to anyone.


As long as such asymmetrical power distribution is the case — and it’s inherent to “democratic” control of education — no proposal, no matter how initially tough, is likely to make any long‐​term improvements. As the matrix below lays out, no matter what combination of standards and accountability you have, politics will eventually lead to poor outcomes. It’s a major reason that the history of government schooling is strewn with “get‐​tough” laws that ultimately spend lots of money but produce no meaningful improvements, and it’s a powerful argument for the feds complying with the Constitution and getting out of education. 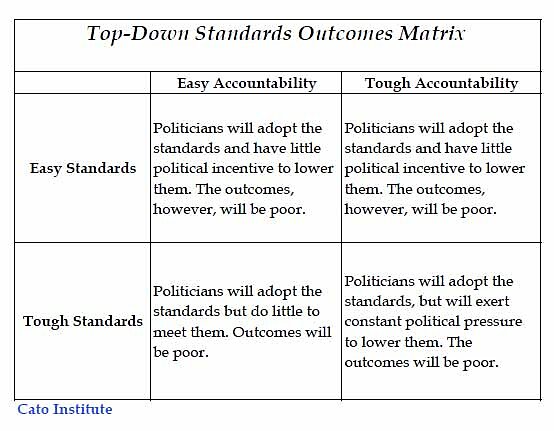 When all is said and done, you can throw all the great things you want into the federal education bag, but as long as politicians are making the decisions you’ll always come up empty.