The public has finally started to give President Obama’s economic policies a big “thumbs down”. This shouldn’t surprise anyone who is familiar with the Misery Index.


While President Obama sings the glories of big government, it is ironic that he has been marked by the curse of government failure. One metric that measures how this curse will affect the President’s performance is the Misery Index (see the accompanying chart). 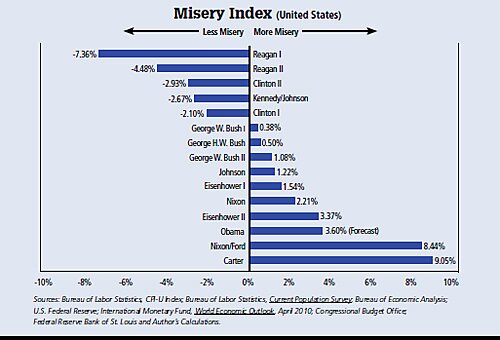 
I have forecast what President Obama’s most likely Misery Index score will be at the end of his current term. This miserable score — one that is relative to George W. Bush’s very weak performance in his second term — is already baked in the cake and can be laid squarely at the feet of President Obama’s own policy errors and government failure. For a president whose agenda is designed to overthrow the Reagan Revolution, the Misery Index should be a sobering reminder that free markets, not big government, generate prosperity.