Without government interference, insurance markets will naturally charge higher premiums for riskier individuals. For example, life insurance premiums vary considerably based on factors that increase the likelihood of death, such as age, gender, smoking status, and health.

Under Obamacare, many factors that influence healthcare expenditures are excluded from premiums. For example, premiums make no distinction for obesity, likelihood of having a baby, alcoholism or pre-existing conditions. One notable exception is for smokers, where premiums may be up to 50 percent higher than that for non-smokers. I have collected data on premiums for smokers and non-smokers in 35 states, and the data shows large variation in the extent to which smokers are charged more for their choice.

Smokers are certainly a risker group than non-smokers. Thus, one would expect some actuarial adjustment to premiums. Given the variation across states, it is clear that premiums vary not only due to a smoker’s greater risk, but other factors as well. At least part of the markup for smokers should be viewed as a “smoker’s tax” rather than an actuarial adjustment.

One expects that the detrimental effects of smoking would build over time. You wouldn’t expect to see large risk adjustments for young individuals. Let’s consider a 27-year-old who doesn’t receive subsidies but is mandated to purchase health insurance. If a non-smoker lived in Cheyenne, WY, he or she could purchase Blue Cross Blue Shield of Wyoming - BlueSelect Silver ValueTwo Plus Dental plan for $334 per month. This plan has a $3,000 deductible and an out-of-pocket maximum of $6,600. If the 27-year-old smoked, the same plan would be $417 per month, or 24.9% higher. For a pack-a-day smoker, this represents a $2.72 per-pack increase in expenditure due to Obamacare.

However, not all of the $2.72 per-pack is a tax. Smokers are more expensive. Consider a non-smoker in Marquette, MI, who selects Blue Cross Blue Shield of Michigan - Blue Cross Silver Extra with Dental and Vision, a Multi-State Plan. That person pays $335 per month, nearly identical to the premium for the non-smoker in Wyoming. The plan has a $2,000 deductible and an out-of-pocket maximum of $5,500. If the 27-year smoked, the same plan costs $351 per month (4.8 percent higher), or $0.53 per-pack of cigarettes. If 53 cents per pack approximates the actuarial adjustment for young smoker, then much of the mark-up in Wyoming – $2.19 of the $2.72 – doesn’t represent risk, and can be viewed as a smoking tax.

It might be the case that the numbers above are the exception, not the rule. Yet, in a more comprehensive analysis of premiums, it is clear that the smoker’s premium varies considerably by state. Wyoming has some of the highest mark-ups, while Michigan has some of the lowest mark-ups. The plans presented above are quite similar with respect to premiums and cost sharing for non-smokers, yet the smoker’s mark-up varies greatly. The table below shows average mark-ups for young smokers, restricting the set of plans to Obamacare “Silver” plans for 27-year-olds. 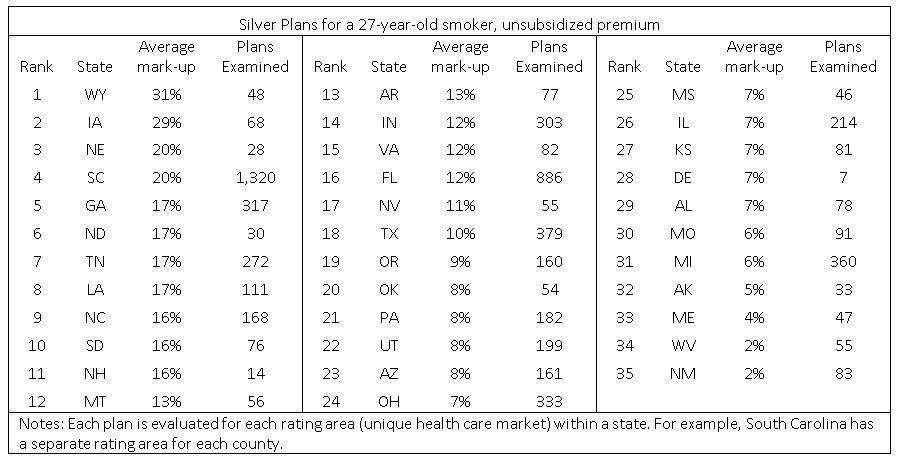 If a “pack-a-day” smoker is an overstatement for actual consumption, then Obamacare cigarette taxes are extremely high in some states – in fact, far higher than the explicit excise tax. The median excise tax on cigarettes is $1.36 per pack, and is $0.60 per pack in Wyoming (ranking 40th out of the states) and $2.00 per pack in Michigan (ranking 12th).

Based on this analysis, it is clear that the Obamacare smoker’s tax doesn’t represent risk adjustment in many states. But why are cigarette taxes in Obamacare – above and beyond the actuarial adjustment – a problem? Aren’t smokers are doing something terrible to themselves (and others, through secondhand smoke)? In economics, one of the core assumptions is individual rationality. People weight the costs and benefits of their actions and do what’s best for them. Everyday behavior – from smoking cigarettes, to eating pizza instead of broccoli (or sometimes both), to jaywalking in order to save a few seconds of time, to getting in the car to drive to work – involves risk and rewards. If people understand the inherent risks and rewards, then we respect consumer autonomy even if we wouldn’t make the same choice. The economic argument for taxing behavior like smoking (through excise taxes or Obamacare taxes) is that it creates negative externalities. For smoking, there are in fact negative externalities. These are costs produced but not borne by the smoker, the most obvious of which is secondhand smoke. When such externalities exist, corrective taxation is one of several ways that a more efficient allocation of resources can be achieved. Nonetheless, evidence suggests that cigarette taxes at their current levels more than pay for such negative externalities. As importantly, there’s no reason to think these externalities are much different in Wyoming and Michigan.

With that said, should we be concerned with Obamacare cigarette taxes versus, say, excise taxes? One disadvantage of differing excise taxes across state or city borders is that it encourages smuggling or purchases from low-tax areas. Thus, the tax doesn’t correct the negative externality. That differs, of course, from Obamacare taxes where a person would need to move from Wyoming to Michigan to reduce the tax. Yet, Obamacare cigarette taxes present a host of problems. The vast majority of people do not receive health insurance from Obamacare, so its cigarette taxes do not correct the externalities smoking produces. In addition, the cigarette taxes in Obamacare lack transparency. They are buried in the weeds of Obamacare premiums as hefty smoking taxes, meant to influence or punish the choices of 18 percent of American adults. Perhaps if smoking rates were as high as obesity, they’d have enough political power that bureaucrats wouldn’t punish them.

Aaron Yelowitz is an associate professor in economics at University of Kentucky and a Visiting Scholar at Cato Institute.