House Republican leaders cancelled a vote on the American Health Care Act nearly two weeks ago, after it became clear the measure would not command a majority. The conservative House Freedom Caucus objects that, far from repealing and replacing ObamaCare, the AHCA would make ObamaCare permanent. It would preserve the ObamaCare regulations that are driving premiums higher, causing a race to the bottom in coverage for the sick, and causing insurance markets to collapse. The Congressional Budget Office projects the bill would cause premiums to rise 20 percent above ObamaCare’s already‐​high premium levels in the first two years, and leave one million more people uninsured than a straight repeal. Oh, and it also reneges on the GOP’s seven‐​year campaign and pledge to repeal ObamaCare.


The House Freedom Caucus has offered to hold their noses and vote for the AHCA despite several provisions its members dislike, including a likely ineffectual repeal of ObamaCare’s Medicaid expansion, new entitlement spending, and the preservation of most of ObamaCare’s regulations. All they ask is that House leaders agree to repeal the “community rating” price controls and the “essential health benefits” mandate that are the main drivers of ObamaCare’s higher premiums, eroding coverage, and market instability. Repealing those provisions would instantly stabilize insurance markets and cause premiums to plummet for the vast majority of Exchange enrollees and the uninsured.


A collection of House moderates known as the Tuesday Group, meanwhile, has threatened to vote against the AHCA if it repeals community rating. The group has refused even to negotiate with the House Freedom Caucus. One Tuesday Group member recommended to the others, “If that call comes in, just hang up.”


In an attempt to bridge the divide, the White House has proposed to let individual states opt out of certain ObamaCare regulations, including the essential‐​health‐​benefits mandate and (presumably) the community‐​rating price controls. Reportedly, states could apply to the Secretary of Health and Human Services to waive some (but not all) of ObamaCare’s Title I regulations, and the Secretary would have discretion to approve or reject waiver applications based on their compliance with specified metrics, such as premiums and coverage levels.


What might seem like a fair‐​minded compromise is anything but. The fact that White House officials are floating this offer means they have reneged on their prior proposal to repeal ObamaCare’s “essential health benefits” mandate nationwide. The current proposal would keep that mandate in place, and make it the default nationwide. That alone makes this “opt out” proposal a step backward for ObamaCare opponents.


Even if the White House were not displaying bad faith, an opt‐​out provision offers little to ObamaCare opponents. The obstacles to using such a waiver would be so great, it is unlikely any states would be able to exercise it, which would leave ObamaCare’s regulations in place in all 50 states.


Opting‐​Out Would Be All But Impossible


Under an opt‐​out, ObamaCare’s regulations — in particular, the community‐​rating price controls and essential‐​health‐​benefits mandate that the House Freedom Caucus has said are the price of their votes — would remain the law in all 50 states. States that do not want those regulations would have to take action (and get federal permission) to roll them back. Federal control would remain the default.


To take advantage of the waiver process, ObamaCare opponents would have to fight, again and again, in state after state, to achieve in each state just a portion of what President Trump and congressional Republicans promised to deliver in all states. Opponents would have to convince both houses of each state legislature (Nebraska excepted), plus the governor, plus the Secretary of HHS to approve the waiver, all while being vastly outspent by insurance companies, hospitals, and other special interests.


If President Trump and congressional Republicans advance an opt‐​out provision, they will essentially be telling ObamaCare opponents, “Thank you for spending all that money and effort electing us, but we are not going to repeal ObamaCare. Instead, we want you to spend even more money having ObamaCare‐​repeal fights in all 50 states. And good luck getting state officials to keep a promise they haven’t made, when we won’t even keep the promise we did make.”

(Above: President Donald Trump promised in his “Contract With the American Voter” to deliver legislation that “fully repeals” ObamaCare. It’s a contract, so that’s legally binding, right?)


Given these obstacles and the low likelihood of success, many ObamaCare opponents would decide the waiver option it isn’t worth the effort.


A Provision with a Short Shelf Life


Even if states tried to take advantage of the “opt‐​out,” states could not possibly enact, submit to the federal government, secure federal approval of, and implement a such waiver in time to stabilize their markets under the withering assault from ObamaCare’s regulations, as modified by the AHCA. So the “opt‐​out” would not even protect Republicans in willing states from the political backlash against the AHCA.


Even if states went through all those steps in time, the White House’s proposal reportedly would allow states to opt out of guaranteed issue but not ObamaCare’s ban on coverage exclusions for preexisting conditions. In other words, even if a state successfully used a waiver to stabilize their markets, Republicans would come under fire because the waivers would prevents patients with preexisting conditions from getting any coverage, even for illnesses they have not yet acquired.


Like the AHCA itself, an opt‐​out strategy would thus condemn Republicans to suffer electoral losses because Democrats could reasonably blame ObamaCare’s — and the AHCA’s — premium hikes, lousy coverage, and Exchange instability on Republicans and their supposedly free‐​market reforms.


Those Republican losses and the concomitant Democratic gains would make states less likely to use the opt‐​out provision, and would enable Congress to repeal it by slipping a few lines in an omnibus bill as early as 2019. With few states using the option, there would be little objection.


Even if Congress did not repeal the “opt‐​out” authority, a future HHS secretary could reject state waiver proposals and/​or refuse to renew waivers.


Full Repeal Is Fair to Blue States. An Opt‐​Out Is Unfair to Red States.


Second, under either full repeal or the House Freedom Caucus’ offer, states that have enacted community‐​rating price controls and benefit mandates themselves could keep those regulations without taking any further action. An opt‐​out, by contrast, would require states who don’t want those regulations to take action to remove them.


Prior to ObamaCare, for example, many states had imposed community‐​rating price controls on their individual and small‐​employer markets (see graphics below). 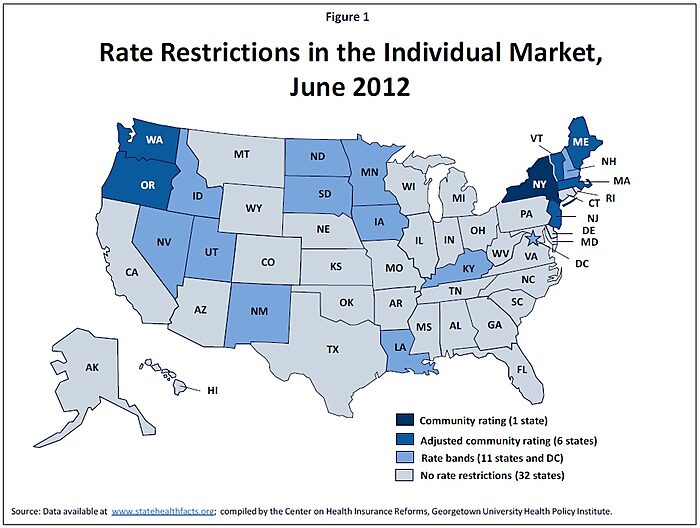 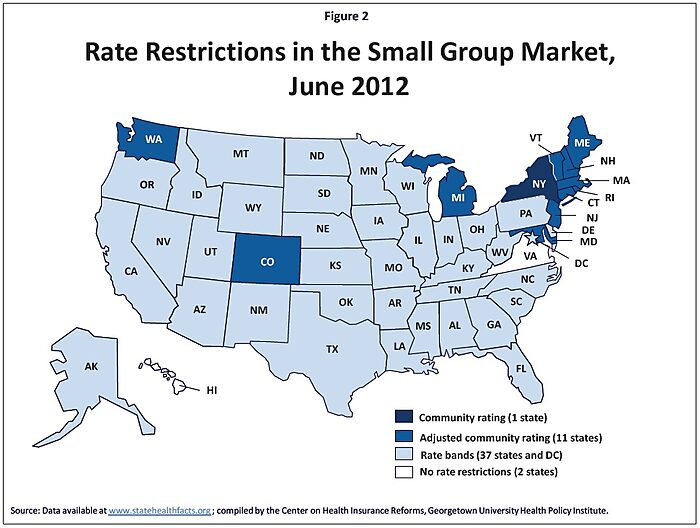 Under either full repeal or the House Freedom Caucus’ stipulation that Congress repeal ObamaCare’s community‐​rating price controls and essential‐​health‐​benefits mandate, any regulations that states have enacted would still have force. Members of Congress from states like Maine, Massachusetts, Minnesota, New Jersey, New York, and Vermont that have enacted community rating thus cannot claim they must vote against full repeal to preserve community‐​rating for their constituents. Both full repeal and the House Freedom Caucus’ proffer are therefore equitable, because they would let each state revert to the regulatory environment they have chosen, without taking any action.


An opt‐​out, by contrast, would impose community‐​rating and other regulations on states that do not want them, and force those states to take action to remove them. Crudely put, an opt‐​out is an attempt by blue states, at no benefit to themselves, to impose their will on red states.


Full repeal and the House Freedom Caucus position are an opt‐in. They would give each state what it wants, because the default under an opt‐​in is freedom and federalism.


Congress should repeal all of ObamaCare’s regulations. States that then want to impose those regulations on their own citizens would have the power to do so.


One silver lining is that this proposal implicitly concedes that community rating is not sacrosanct, and that the states rather than the federal government should decide whether those regulations apply.


Those concessions, the White House’s reneging on “essential health benefits,” and the fact that full repeal would have little impact on states that have similar regulations on the books, gives the ObamaCare opponents leverage to push President Trump to do what he should have been doing all along: push moderates and Democrats to repeal community rating, essential health benefits, and more.


If dismissing this White House proposal out of hand is not possible, the House Freedom Caucus could propose a counteroffer: that the waiver process allow states to opt out of all of Title I, including the subsidies; that the Secretary of HHS have no discretion to reject state opt‐​out proposals; and that when a state opts out, residents of all other states may purchase insurance licensed by that state. Such an approach would effectively repeal Title I in every state.


Absent those changes, this proposal leaves ObamaCare opponents with less than they had before.