We do not need another rift between communities in our divided nation. But that is what Congress gave us with a provision in last year’s tax bill that imposed a patchwork of divisions spread across every state.


The Tax Cuts and Jobs Act created a complex new tax structure called “Opportunity Zones.” The law tasked governors with carving up their states into tax‐​favored O zones and tax‐​disfavored areas we can call NO zones. If investors and developers put a hotel in an O zone, they receive a federal capital gains tax break, but if they put the same project in a NO zone, no such luck.


Vanessa Brown Calder and I discuss Opportunity Zones in The Hill. But pictures are better than words in showing what an unfair mess Congress has created. The U.S. Treasury has posted a national map accessible here, but you get a better idea with these maps of various cities from Bloomberg.


On their way to work, members of Congress pass powerful lettering on the Supreme Court, “Equal Justice Under Law.” So why did they think it was OK to impose unequal tax rules on neighborhoods across the nation?


Since the 1960s, the federal government has made a hash of micromanaging local development through HUD and other spending bureaucracies. I fear O zones will accelerate federal meddling into local affairs on the tax side. Will the government start tying social‐​engineering regulations to the O zone tax rules like they have with spending aid to local governments?


Some features of federal tax law have differential effects on the states as a byproduct of the tax system’s structure. But the O zones are purposeful geographic discrimination. Aside from the unfairness, the new tax loopholes will fuel a 50‐​state lobbying frenzy by landowners and developers to be included in the O zones rather than the NO zones. Is it just coincidence that the founder of Quicken Loans owns lots of property in Detroit’s new O zones?


Below is the new O zone map for Washington, D.C. with the favored zones in yellow. If you own property at 5300 East Capitol St NE, federal tax law has just made you a winner. If you own property across the street at 5300 East Capitol SE, you are a loser. Local governments make lots of such winner/​loser decisions, but we don’t need the federal government compounding the problem with its powerful and corrupting tentacles.


The best parts of the Republican tax law were a step forward for equal treatment, such as the capping of state and local tax deductions. It is unfortunate that a big new loophole goes in the opposite direction. 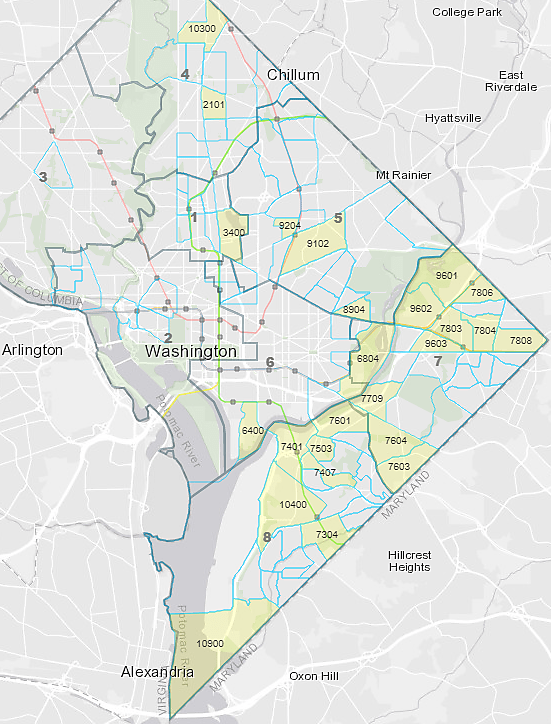