This week the New York Times featured an article lauding Germany’s embrace of renewable energy in recent years. This came just under a year after it published a separate article questioning the costs of subsidized wind power. The article last year noted that “Industrial users still pay substantially more for electricity here than do their counterparts in Britain or France, and almost three times as much as those in the United States, according to a study by the German industrial giant Siemens. The Cologne Institute for Economic Research said there had been a marked decline in the willingness of industrial companies to invest in Germany since 2000.”


In the first, Jonathan Lesser examines the costs of the Cape Cod wind farms in Massachusetts. Cape Wind prices will be around 21 cents per kWh when it starts production and 35 cents at the end of the contract in 2027. In contrast the market supply is currently around 11 cents per kWh and projected to be 15 cents from 2020 through 2027.


In the second article, Lesser uses data on actual wind generation to demonstrate the perverse economic consequences of the inverse relationship between the availability of wind power (at night in the winter) and the demand for electricity (during the day in the summer). 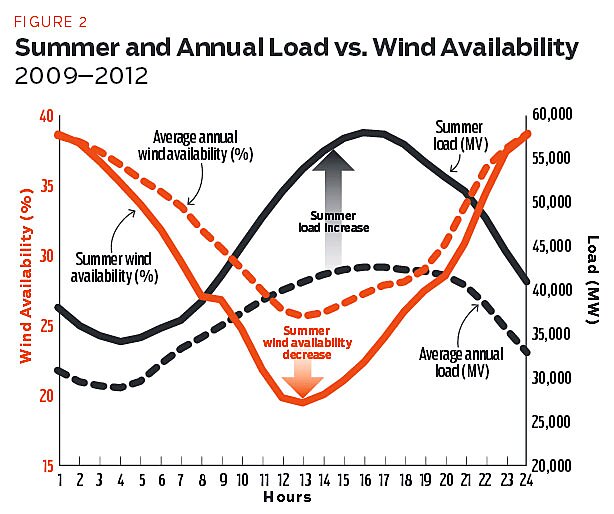 From January 2009 to August 2012 in three of the areas of the country that account for more than half of the installed wind generation capacity in the U.S.: Pennsylvania‐​New Jersey‐​Maryland, the upper Midwest, and Texas, the median wind unit operated only between 26 and 31 percent of the hours in a year and only between 2 and 16 percent of the peak hours in the 10 highest demand days of the year.


Even though renewable power is least available when electricity is in greatest demand, renewable energy subsidies create taxpayer‐​subsidized competition for existing power generators during other lower‐​demand times. This reduces the returns of existing generators. The lower returns cause conventional supply to decline and eventually consumer prices increase particularly at peak times because so little wind generation is produced during peak hours.