It’s been a busy time for nuclear weapons-related news—between President Trump’s alleged confusion about and denouncement of the New START arms reduction treaty with Russia on Friday, the White House’s subsequent assurances that the president understands the treaty, and North Korea’s missile launch test over the weekend.

The people behind the “Doomsday Clock,” have declared that the world is “two and a half minutes to midnight.” That’s the closest we’ve allegedly been to Armageddon since 1953, when both the U.S. and Soviet Union first possessed thermonuclear weapons.

A graph from HumanProgress.org might help put the current fearful commotion in perspective.

The U.S. has 4,000 nuclear warheads stockpiled and Russia has 4,490, according to the Federation of American Scientists, a group devoted to arms reduction, as of their latest data update on January 31st of this year. 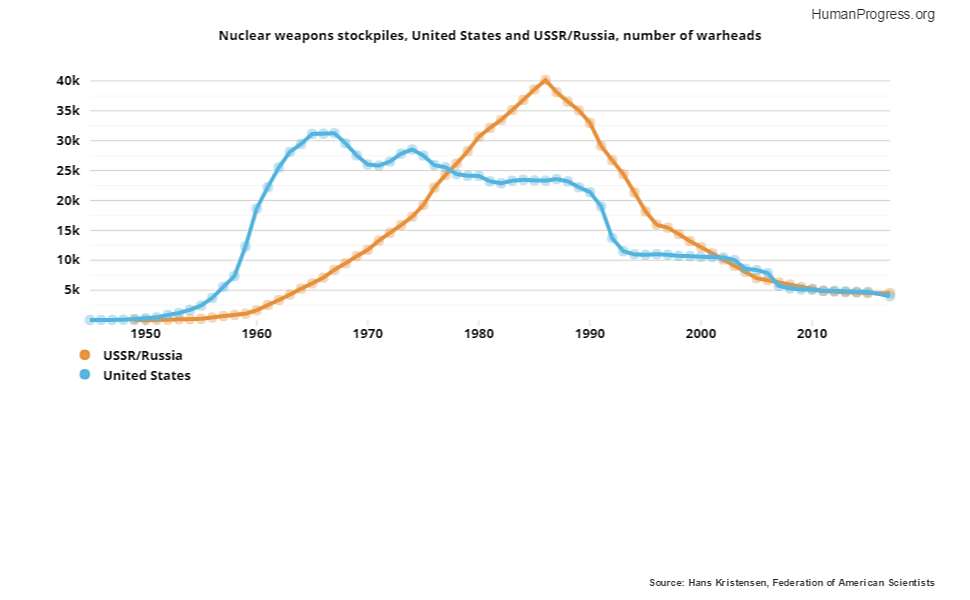 How dangerous is a single warhead? That varies. The most powerful one ever made, the Soviet Tsar Bomba, detonated in a remote area in 1961, created a fireball with a radius of nearly two miles, and a thermal radiation blast able to cause third-degree burns within a radius of almost 50 miles. North Korea’s most powerful warhead tested to date, in contrast, would cause third-degree burns within a radius of less than 2 miles. (If you’re curious about exactly how much of your hometown a warhead would destroy, there’s an app for that).

The graph shows that the U.S. and Russia still have enough warheads to wage a deadly nuclear conflict, but the situation is a far cry from how things stood during the Cold War. The U.S.S.R.’s number of warheads peaked at 40,149 in 1986; the U.S.’s peaked earlier, at 31,255 warheads in 1967. In other words, Russia’s stockpile of warheads today is 11% of what the U.S.S.R.’s was at its peak. The U.S.’s stockpile is 13% of what it was at its peak.

The tension between the two great nuclear powers is also far lower today than it was in the days of constant nuclear drills for schoolchildren accompanied by inane videos. As my colleague Ted Galen Carpenter put it, President Trump has repeatedly “angered advocates of a new Cold War against Russia,” through his eagerness to cooperate with Moscow. (However, he has also pointed out that the recent spat over New START might signal a change in Trump's attitude towards Russia).

No one can predict the future, but a little historical perspective suggests that the threat of a nuclear apocalypse is farther than the Doomsday Clock’s hands claim.

You can explore data on the other nuclear powers’ stockpiles (excluding secretive North Korea's) here.