I received a letter this morning from Prof. James Heckman, in response to my post on the impact of the education stimulus. Prof. Heckman does not take issue with my thesis, which is that the $100 billion in new k-12 spending will likely slow U.S. economic growth. This doesn't mean that he necessarily agrees, but no doubt he is well aware of the relevant evidence and econometric analysis showing that higher public school spending does not raise student achievement, and hence burdens the economy with higher taxes while failing to boost human capital.

Instead, Prof. Heckman argues that "[t]he question is not whether we should invest in human capital, it is when and where we get the most value for our investment—and whether the facts will guide our decisions." He adds that "we should not let partisan or ideological biases cloud the facts or obscure the obvious opportunities."

I agree with all of these points.

Prof. Heckman and I do part ways, however, when it comes to his analysis of who should be investing in what. He writes:

The problem with Dr. Heckman's prediction that government investment in early childhood education will pay huge dividends is that it is based on an untenable overgeneralization from a few tiny studies. My colleague Adam Schaeffer explains in his recent paper "The Poverty of Preschool Promises":

Three programs—the High/Scope Perry Preschool Project, the Carolina Abecedarian Project, and the Chicago Child-Parent Centers—provide the foundation for claims of huge preschool benefits and provide most of the weight behind the push for massive expansions in state-run preschool.

Schaeffer notes that the gains seen in these programs dating back to the 1960s and '70s, which Prof. Heckman has reviewed, are not apparent in large scale government preschool programs such as the ones Prof. Heckman seems to endorse. Schaeffer continues:

Preschool activists consider Georgia and Oklahoma model states because they have long running, fully implemented, universal preschool programs that proponents consider to be high quality.... The real-world evidence demonstrates that, at the same time [these] preschool programs have been massively expanded and their quality... has supposedly improved, the test scores of children in Oklahoma have eroded significantly compared to the national average. And while Georgia’s reading gap narrowed, its math gap stagnated or widened.

In fact, a highly respected economist has cautioned policymakers about overgeneralizing from the tiny preschool programs of two generations ago, stating that:

A much more careful analysis of the effects of scaling up the model programs to the target population, and its effects on costs, has to be undertaken before these estimates [of their impact] can be considered definitive.

Prof. Heckman will recognize that as a quote from his own study, linked above.

If further evidence is required of the need for caution, consider the results of the hundreds of billions in federal spending on compensatory preschool programs dating back to the 1960's (total federal ed. spending since 1965 is about $1.8 trillion). True, these are not precisely identical to the programs Prof. Heckman might recommend, but they are close enough that, if his policy contention is true, we should have seen some noticeable closing of the academic gap between the children of college graduates and those of high-school dropouts, by the time those children reach the end of high school. As I have previously documented, no such closing has occurred. The chart below, of NAEP reading test scores for 17 year olds, is fairly typical of the subject area results (they are marginally better in math and marginally worse in science). 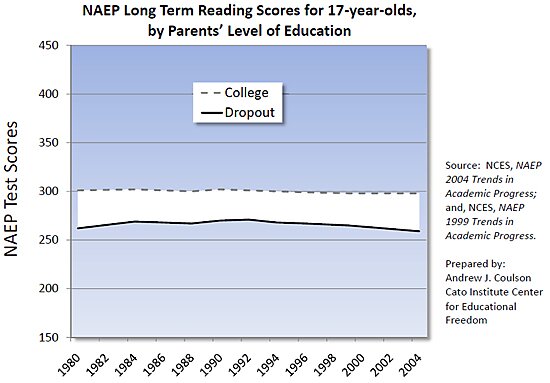 Given Prof. Heckman's obvious interest in raising graduation rates and narrowing other educational outcome gaps, and his belief that we should seek out the best evidence and verify scalability of findings, I am surprised he focuses on the results of a handful of tiny 1960s preschool programs rather than on, say, the nationwide research of his University of Chicago colleague Derek Neal. Neal has found that urban African Americans attending Catholic schools are 26 percentage points more likely to graduate from high school and twice as likely to graduate from college as comparable students in public schools. Similar results have been found by others, as I note in a recent literature review.