No Thanks to Aid, Africa Is Getting Better

In spite of our humble efforts, the arguments concerning the efficacy of foreign aid go on. The aficionados of the debate are no doubt aware of the latest controversy involving Columbia University Professor Jeffrey Sachs’ Millennium Villages Project (MVP). In 2006, Sachs convinced wealthy donors – from the United Nations and the government of Japan to Goldman Sachs and Pepsico – to sponsor economic development in 14 villages in 10 African countries. If aid in those villages worked, Sachs theorized, the program could be scaled upwards and vindicate those who advocate in favor of large foreign aid transfers from wealthy countries to poor ones.

Unfortunately for Sachs, some of MVP’s previous claims about the beneficial effect of aid on human wellbeing in the millennium villages have been called into question. The latest installment in this saga involves the MVP’s claim that “the average rate of reduction of mortality in children younger than 5 years of age was three-times faster in Millennium Village sites than in the most recent 10-year national rural trends (7.8% vs. 2.6%).” World Bank research, however, found that “under-5 mortality has fallen at just 5.9% per year at MVP sites, which is slower than the 6.4% average annual decline in under-5 child mortality in the MVP countries nationwide.”

Whatever the actual decline in the Millennium villages, note the remarkable reduction in the mortality of children under the age of 5 (per 1000 live births) in selected African countries. As I noted elsewhere, Africa has just experienced a decade of robust economic growth fueled by economic reforms and high commodity prices. That, evidence suggests, may be better at explaining the fall in child mortality than foreign aid. 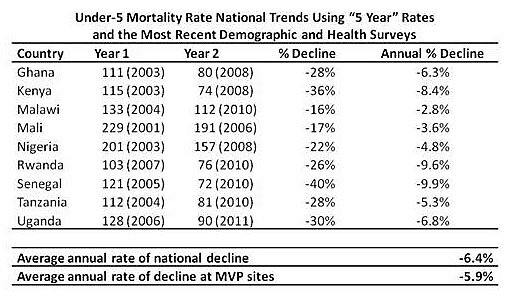