No Rest for the Weary in Afghanistan

During a Senate hearing yesterday (the one in which U.S. CENTCOM commander General David Petraeus passed out from dehydration), it became clear that “success” will take far longer than July 2011, the date U.S. President Barack Obama pledged to begin the drawdown of U.S. troops. 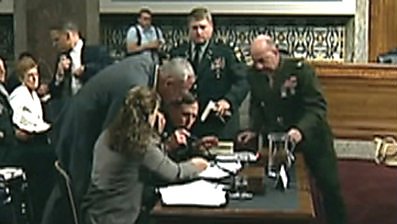 As I write in today’s Daily Caller, recent developments do not bode well either for the July 2011 timetable, or for the coalition’s overall strategy.

In this respect, the Obama administration’s overly ambitious policies do more than needlessly inflate Afghan expectations; they severely erode America's reputation globally. Promising to 'end the tragic conflict in Afghanistan and promote national reconciliation, lasting peace, stability and respect for human rights in the country' is absurd. Promising to do so according to an 18-month timetable is laughable. Afghanistan has been in continuous war since the 1970s. Americans should recognize that the Obama-McChrystal-Petraeus strategy grossly overestimates America’s power to spread wealth and stability, and demand a new set of goals that will allow the United States to bring this long war to a swift end.

You can read the rest here at Daily Caller.