Another set of national exam results—the National Assessment of Educational Progress (NAEP)—is upon us, and much will likely be made of them. But in the aggregate, what the new scores show is just that things haven’t changed much over the last couple of years, and only as captured by this particular test. Burrowing down and comparing states, subgroups of kids, and smaller jurisdictions that have implemented different policies, spent more or less, and experienced numerous other things, might suggest some avenues for further exploration, but the only conclusion we can state with any confidence is that nothing happened—not Common Core, not school choice, not the Every Student Succeeds Act (ESSA)—that appears to have seismically altered NAEP outcomes.

That may be just fine: Americans have increasingly and broadly rejected standardized tests scores as the end-all-and-be-all of education, culminating in the ESSA, which in late 2015 replaced the No Child Left Behind Act and its obsession with testing. And as we are increasingly learning, tests scores may have little connection to other outcomes like high school completion, and neither really addresses whether kids are learning desirable moral values, or creative thinking, or the myriad other big things parents want for their children.

That important preface offered, what are the highlights, such as they are, in the latest NAEP?

First, that overall scores for 4th and 8th graders—no high school kids this time around—were statistically flat between 2015 and 2017 for all but 8th grade reading, which went up two scale points, from 265 to 267. (Note, they were at 268 in 2013, so stagnation persisted over four years). Within those numbers, top scorers tended to see scores rise, and lower scorers scores decrease, while lower-income students tended to see stagnation or slight dips.  Private schools—actually, only Catholic schools are reported—also saw general stagnation. 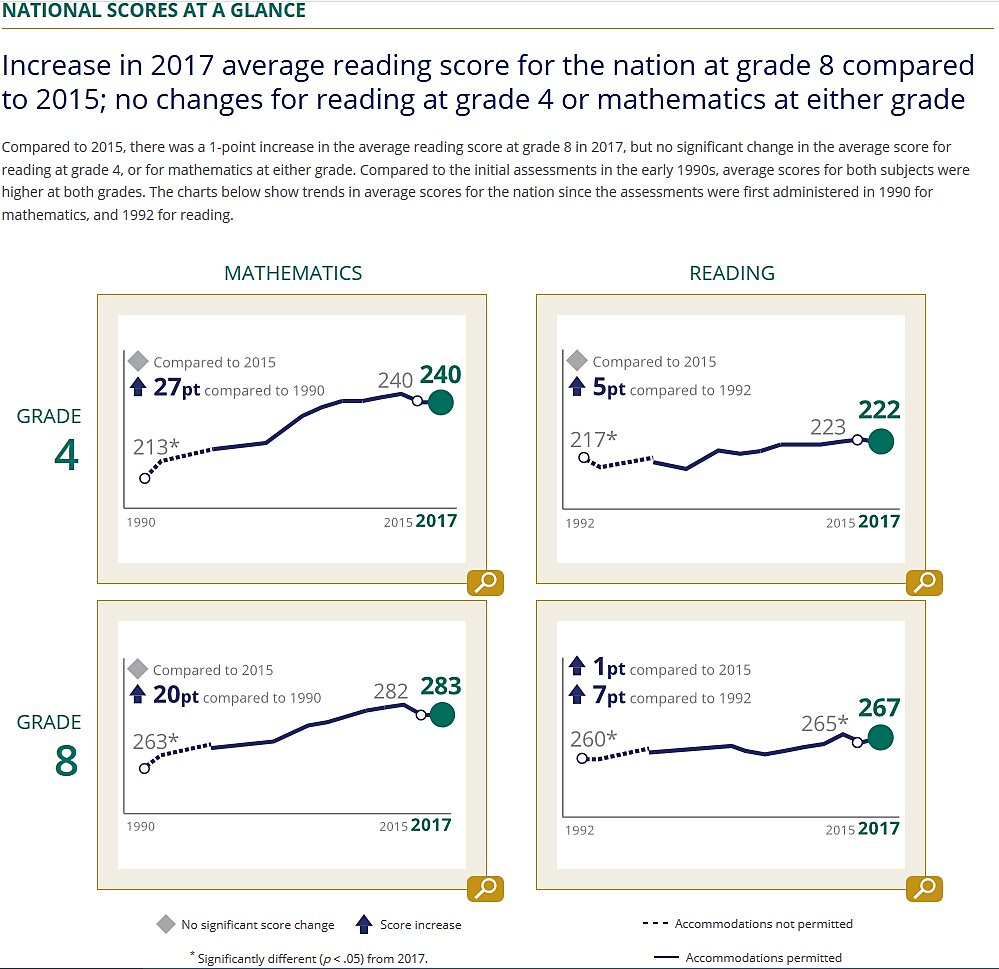 Maybe there are some standout states? For math, only Florida saw scores rise in both 4th and 8th grade, hitting a new high in the state for 4th grade, but not yet returning to the state’s 8th grade peak in 2013. In reading no state saw increases in 4th grade, but Florida was joined by nine other states with increasing 8th grade scores. So Florida may be doing more right than any other state, but what that is NAEP can’t tell us. It has been a very choice-friendly place, but also fond of test-driven accountability systems and even requiring kids to pick “majors” in high school. Heck, maybe it just does the best standardized testing prep, which may explain a lot of score increases in the past. (Corey DeAngelis will have more on what NAEP can't tell us soon!)

Finally, 21 districts have new NAEP scores. Not surprisingly given the national results, most saw little change between 2015 and 2017. San Diego, though, saw statistically significant increases in 4th grade math and reading, so maybe that city bears watching.

Two years of new data is not very much, and a whole lot influences standardized test scores. And frankly, such scores tell us only a fraction—maybe a very tiny one—of what parents want to know about education. So let’s hope we don’t lose our collective heads over these scores, and do not see a new policy obsession with standardized testing outcomes like we experienced under No Child Left Behind. Instead, let’s let individual educators and parents—who value so many things—choose what they think is most important in education.