Nigeria Spins Out of Control, and the IMF Remains Unaware

Nigeria’s President, Muhammadu Buhari, and his government have lost control as Nigeria’s economic crisis sends that African nation into a doom-loop. Everyone, including the President’s wife, Aisha, knows that Nigeria is going down the tubes. But not the International Monetary Fund (IMF). As is often the case, the IMF doesn’t have a clue. The IMF’s October 2016 World Economic Outlook projects Nigerian inflation to average 15.4 percent for 2016.  This number is in sharp contrast to my Johns Hopkins-Cato Institute Troubled Currencies Project’s inflation estimate for Nigeria. We estimate that the year-over-year inflation rate is currently 104.8 percent (see the chart below).

Why is the IMF so far off base? Because it is doing what it often does: it is taking the Central Bank of Nigeria’s (CBN) official inflation data at face value. That official rate averaged 14.3 percent from January to August of this year. For the IMF forecast to materialize, official annual inflation in Nigeria would need to average 17.6 percent for the September through December period.  What did the latest inflation report from the Central bank of Nigeria show?  According to the CBN, annual inflation was 17.9 percent in September. The IMF’s blind acceptance of the CBN’s data is a big mistake. 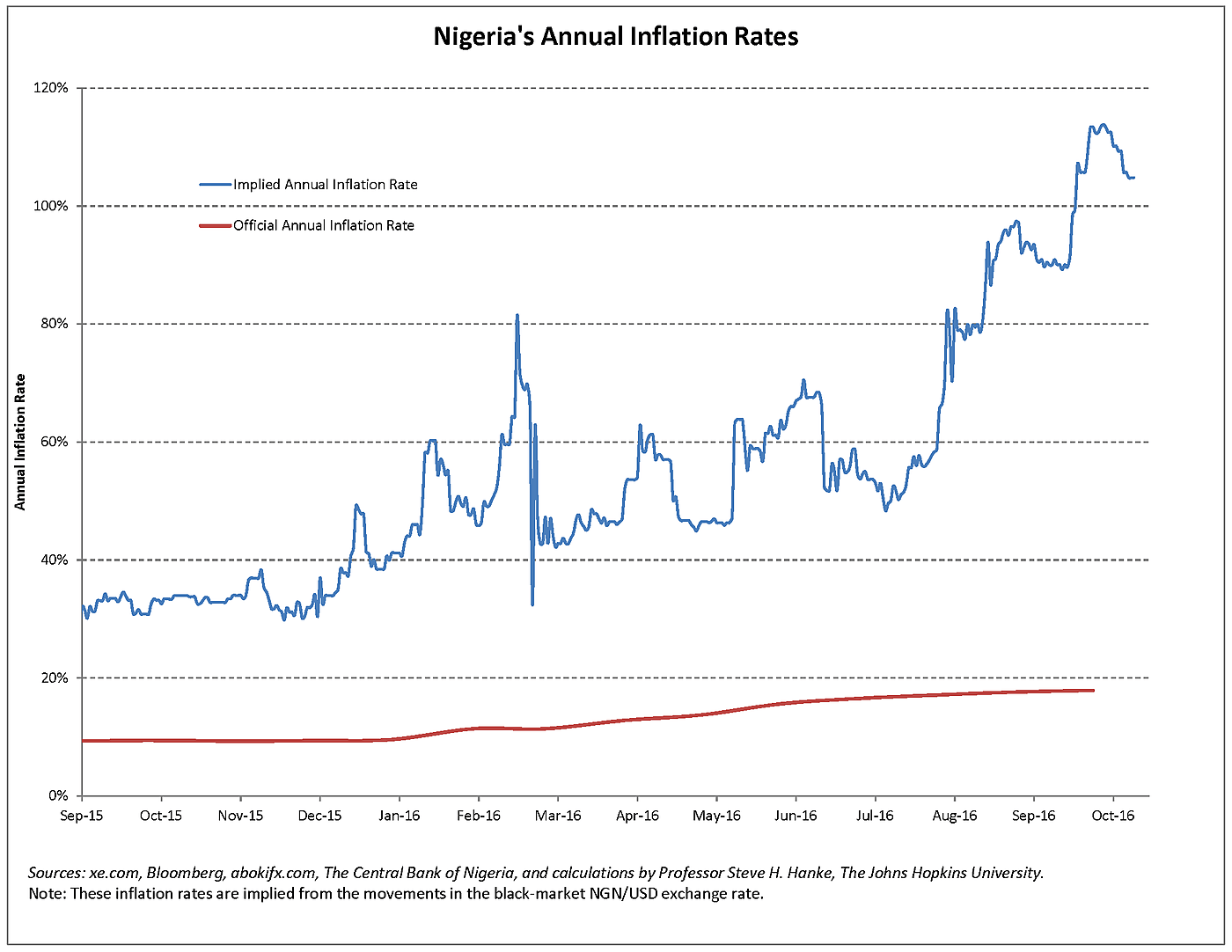 Driving Nigeria’s surging inflation is the collapse of its currency, the naira (NGN). Indeed, many of Nigeria’s recent economic troubles are reflected in the rapid depreciation of the naira.  For over a year, the CBN held the official exchange rate at about 200 NGN/USD, with the aid of exchange controls.  During this period, dollar shortages raised their ugly heads and caused foreign investment in Nigeria to deteriorate. The shortages even forced airlines to stop flights into Lagos. Simultaneously, a black market (read: free market) for foreign currency developed and the actual value of the naira deteriorated rapidly (see the chart below).

In June 2016, the CBN introduced a managed “float” and claimed that the resulting NGN/USD rate was a purely market driven exchange rate. After a massive one-day depreciation of the official NGN/USD rate, the naira has traded at about 315 NGN/USD while the black market rate plunged to over 450. The sharp contrast between official and black market rates is evidence that the CBN is spreading disinformation (read: lying) about its embrace of a free market for foreign exchange.

Reports have emerged claiming that Nigerian businesses cannot access FX from the banks officially tasked with providing it, so they are turning to bureaux de change (BDCs) and black market dealers. On October 16, 2016 the black market rates and the BDC rates were both 460 NGN/USD, and the official rate was 315 NGN/USD.  The CBN brushes off the existence of the black market, claiming these rates don’t reflect the true value of the naira and only account for a small portion of FX transactions.  This is nonsense.  If this were true, stories of businesses struggling simply to access foreign exchange would not be so common.  The CBN’s claim to embrace a purely free market determined Naira is a lie.  Take what the Central Bank of Nigeria says with a grain of salt. 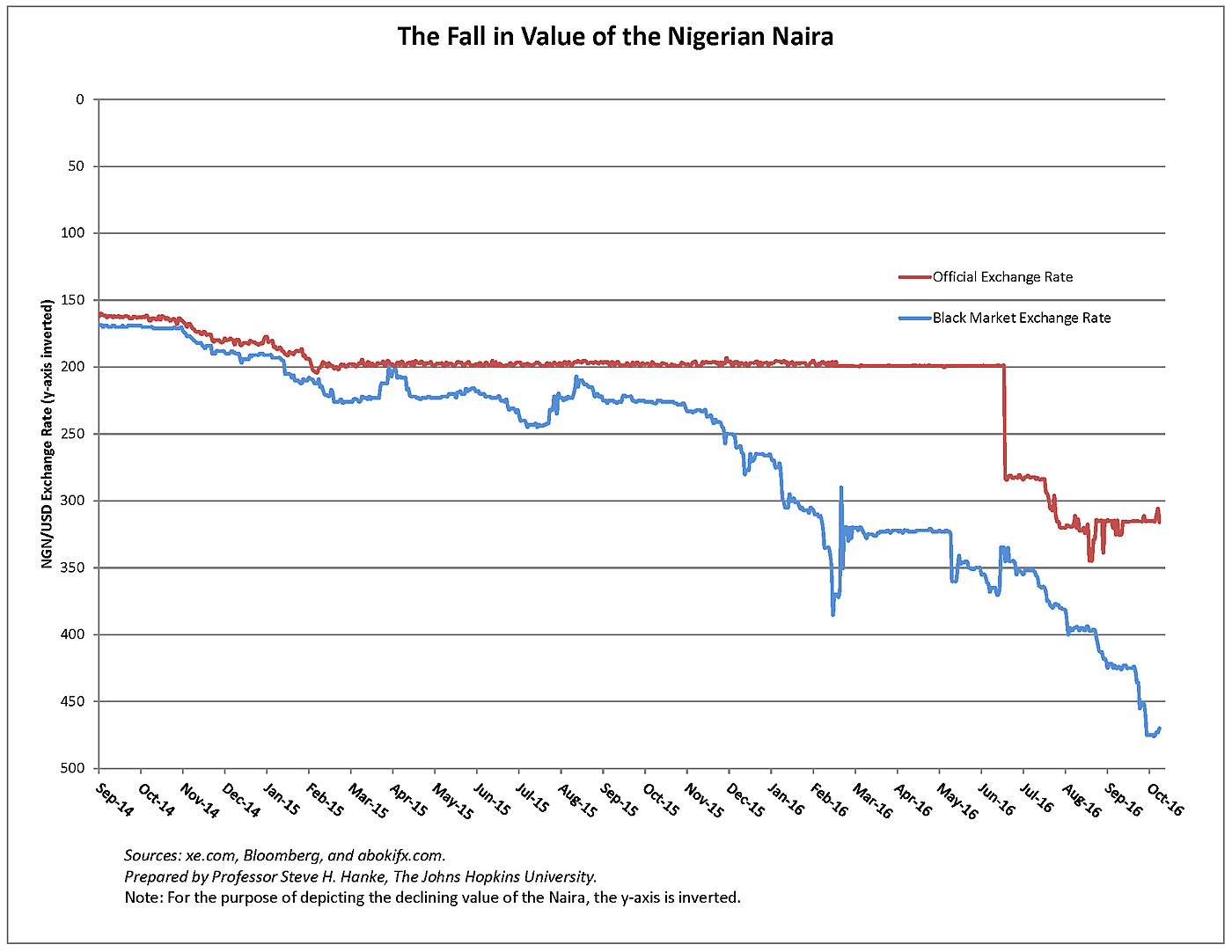 Nigeria is in a doom loop – one that the government and the CBN lie about and the IMF blindly repeats.