Last week the National Highway Traffic Safety Administration (NHTSA) completed rulemaking that mandated that all cars and light trucks sold in the United States in 2018 have rearview cameras installed.


In 2008 Congress enacted legislation that mandated that the NHTSA issue a rule to enhance rear view visibility for drivers by 2011. Normally, such a delay would be held up as an example of bureaucratic ineptitude and waste. But in this case, NHTSA was responding to its own analysis that determined (p. 143) that driver error is the major determinant of the effectiveness of backup assist technologies including cameras.


In addition, NHTSA concluded that the cost per life saved from installation of the cameras ranged from about 1.5 times, to more than 3 times the 6.1 million dollar value of a statistical life used by the Department of Transportation to evaluate the cost effectiveness of its regulations. NHTSA waited until the possibility of intervention by the courts forced it to issue the rule. The problem in this case is Congress overreacting to rare events rather than the agency. 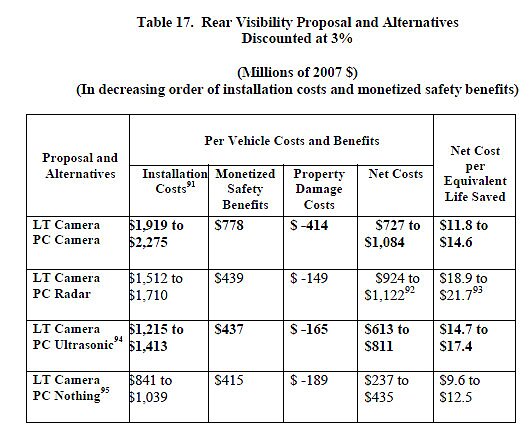