New Jersey is broke. In an effort to get the state back on its financial feet, governor Chris Christie has made across‐​the‐​board cuts–including cuts to public school spending. This week, a judge ruled that his school cuts are unconstitutional, in light of state supreme court precedents dating back decades.


Basically, New Jersey’s highest court has ruled that the state must spend a fantastically large sum of money in order to meet its constitutional requirement of providing a “thorough and efficient” school system.


Slight problem: by definition, a system that spends outrageous sums of money for outcomes that are merely “thorough” cannot also be “efficient.” The courts seem to have resolved this logical contradiction by ignoring the word efficient. So now they just demand that the state spend more money on public schools, while acknowledging how futile that is. In Judge Doyne’s words:

Despite spending levels that meet or exceed virtually every state in the country, and that saw a significant increase… from 2000 to 2008, our “at‐​risk” children are now moving further from proficiency. 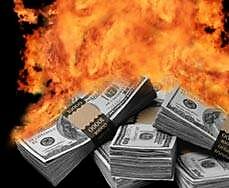 Spending more on public schools will do one thing for the state, though: bankrupt it. Unless something changes soon, we could well see the Detroitification of New Jersey: an exodus of residents fleeing failed government services and rising taxes, creating a death spiral as the shrinking tax base exacerbates the fiscal problems and perpetuates the exodus.


The only way that I can see for New Jersey to survive the court‐​mandated burden of its public school systems is to provide families and taxpayers with an alternative to them.


The state legislature is currently considering a k‐​12 school choice program that would subsidize private school tuition for poor kids by giving businesses a tax break if they donate to non‐​profit scholarship organizations. Florida has a program like this and it saves taxpayers $1.49 for every dollar it reduces tax revenues. That’s because monopoly public schooling is so much less efficient (there’s that word again) than parent‐​chosen private schooling.