Today we’ve released The Human Freedom Index, a new report that presents a broad measure of personal, civil, and economic freedom around the world. It is co‐​published by the Cato Institute, the Fraser Institute (Canada) and the Liberales Institut (Germany), and is the most comprehensive index on freedom yet created for a globally meaningful set of countries.


My co‐​author Tanja Porcnik and I look at 76 indicators in 152 countries to capture the degree to which people are free to engage in voluntary exchange and enjoy major liberties such as freedom of speech, religion, and association. We also include measures on freedom of movement, women’s freedoms, safety and security, and rule of law. We use data from 2008 to 2012, the most recent year for which sufficient data is available.


The United States fell from 17th place in 2008 to 20th place in 2012. The decline reflects a long‐​term drop in every category of economic freedom and in its rule of law indicators. The U.S. performance is worrisome and shows that the United States can no longer claim to be the leading bastion of liberty in the world. In addition to the expansion of the regulatory state and drop in economic freedom, the war on terror, the war on drugs, and the erosion of property rights due to greater use of eminent domain all likely have contributed to the U.S. decline.


We do not measure democracy in the index, though we consider it important. Indeed, we find a strong relationship between human freedom and democracy, a link that merits further study. As such, Hong Kong is an outlier in our index. Its high ranking is due to its traditionally strong rule of law, and high levels of both personal and economic freedom, something that all advocates of freedom, including democracy advocates, should seek to protect. The danger there is that China’s efforts to limit democracy will lead to increasing interference in the territory’s institutions—including on the independence of its legal system and the freedom of its press—which will reduce its overall freedom. 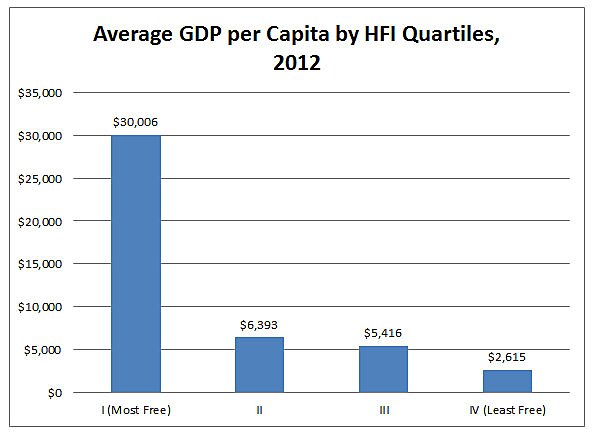 We believe that freedom is inherently valuable and plays a central role in human progress. As the graph above shows, belonging to the freest countries in the world greatly improves the average person’s income. Read the study here to see our other findings, the data, and other goals of the research.