New Farm Bill Much Larger Than Last One

Congress is gearing up to pass the first big farm bill since 2008. The logrolling between farm interests is nearing completion, the Republicans have given up on making substantial food stamp cuts, and the Treasury stands ready to borrow another $1 trillion. We are all set to go.


It looks like the final farm bill will be expected to cost about $950 billion over 10 years. CRS has details on bill versions from the Fall, but I adjusted those numbers based on the reported GOP cave‐​in on food stamps.


If the final number is $950 billion, the 2014 farm bill will cost 48 percent more than the $640 billion farm bill passed in 2008. Farm bill supporters claim that the new bill includes “savings” and “cuts,” but that is a myth created by the rising CBO baseline. The reality is that Congress is set to impose a huge, damaging, and unaffordable burden on taxpayers and the economy. 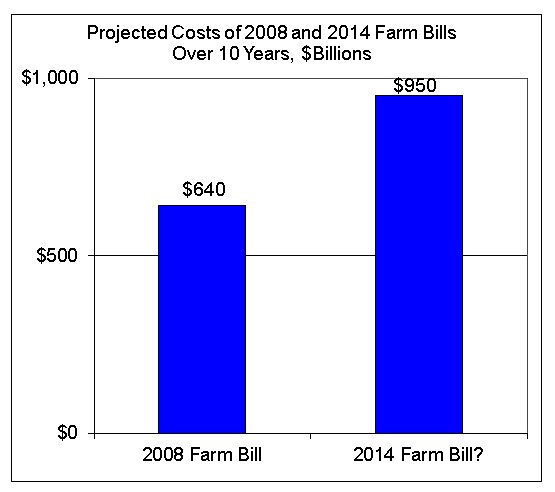