New Evidence that Plants Are Slowing the Growth of Greenhouse Gases

Scientists have known for decades that, as global carbon dioxide levels increase, so too does the standing biomass of the world’s plants. Carbon dioxide is a strong plant fertilizer.

As plants grow better, they also increasingly act as carbon sinks as they convert atmospheric carbon dioxide, with a little help from water and sunshine, into carbohydrates stored as biomass. Some of that carbon is returned to the air annually through decomposition, but other portions are are stored for longer periods in the soil, downed logs, houses, etc.  This plant-based carbon sink helps to offset the growth of global carbon dioxide emissions from human activities (primarily from the burning of fossil fuels). Together, the terrestrial carbon sink, along with the oceanic carbon sink, annually takes up more than half of the anthropogenic CO2 emissions—and remarkably, as global CO2 emissions have increased, so too has the global CO2 sink.

But now comes new evidence that plants may be helping to combat global warming through another mechanism as well, slowing the build-up of the atmospheric concentration of methane (a greenhouse gas some 25 times more effective than CO2 on a molecule-for-molecule bases at adding pressure for the world to warm).

As shown in the fugure below the jump, the growth rate of the atmospheric concentration of methane (CH4)—which is projected by the IPCC to be rising rapidly—began slowing down in the early 1990s and even topped out for a few years in the mid-2000s. Since about 2007, the atmospheric concentration of CH4 has been rising again, but only at about half that of the pre-1990 rate. 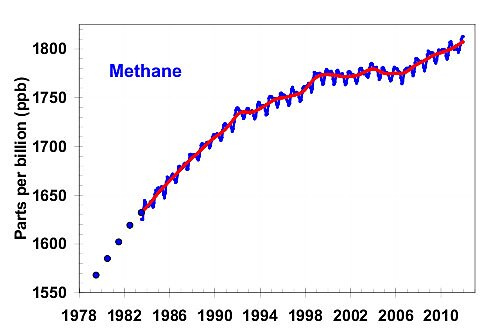 Figure 1. Atmospheric methane concentration (source: National Oceanic and Atmospheric Administration).This behavior is not understood by climate scientists. It contravenes alarmist scenarios of runaway global warming fueled by a positive methane feedback (the scenario for which is that warming leads to thawing of the arctic permafrost, which releases methane, which leads to more warming, and so on).

A team of scientists from Lund University and Stockholm University set out to investigate recent claims that some plants release methane and are therefore a source of global methane emissions. They set up instruments to measure methane exchange on a collection of individual branches of four different tree species in a 100-year-old forest in central Sweden. A set of control experiments was also conducted in a laboratory setting. They just published their findings in the journal Geophysical Research Letters. Much to their surprise, the researchers found that the trees (both in the field and in the lab) were taking up methane rather than releasing it. They suggest that the presence of a “bacteria with the ability to consume [methane] would be a possible explanation for [the observed behavior].”

That’s not the only good news.

The researchers then executed the extremely risky (and oft ill-advised) maneuver of scaling up from a few tree branches in central Sweden to the level of the global forest canopy. Their research “indicates that the canopy might play an equally important role [in CH4 uptake] as the soil in the global context.” In other words, their results show that trees are playing a large (and hitherto unknown) role as a sink in the global methane cycle.

In the authors’ own words (with my emphasis):

Two recent studies give alternative explanations to the slow-down in the growth rate of atmospheric methane in the last decades. One of them indicates that it is due to a stabilization of fossil-fuel emissions (Aydin et al., 2011) whereas the other explains it by a decrease in microbial methane sources in the northern hemisphere (Kai et al., 2011). Our results offer a third explanation: that an increasing amount of CH4 has been taken up by vegetation during the last decades as a consequence of increased greenness (Myneni et al., 1997), NPP [net primary production] (Nemani et al., 2003) and GPP [gross primary production] (Chen et al., 2006) as observed by satellite remote sensing.

This is still highly a highly speculative result and one that will require a heck of a lot more study and independent confirmation. But it is a novel finding and goes to show that there is still a lot of interesting research ongoing in the field of climate (change), and that most definitely the science is not “settled.”