Negative Home Equity Is Nothing New

With the near constant calls for mortgage restructuring and the proposals to reduce mortgages via eminent domain, you would think that no homeowner in America has ever before had negative equity (i.e., a situation where a homeowner owes more on his mortgage than what his house is worth).  If you did think that, you'd be wrong.  A recent article published in the HUD journal Cityscape examines the trend in negative equity from 1997 to 2009 (incorporating the most recent American Housing Survey data). A nice summary table of the data is below the jump.

Without a doubt, the percent of underwater housing units jumped significantly since the housing bubble burst. But even during the peak of the bubble, say 2005, around 5 percent of units were underwater.

Interestingly enough, the biggest driver seems to be among mobile or manufactured homes, with over a fourth underwater even at the peak of the bubble.  Many mobile home owners do not own the land their house sits on, which likely explains this trend. The lack of political concern over their situation (I don't recall anyone in 2005 calling for write-downs) is likely due to the fact that mobile home owners are mostly rural, white and working class, which don't generally get the sympathy of the readers of, say, the New York Times.

But it isn't just a rural issue.  In 2002, before the housing bubble started, about 7 percent of owners with a mortgage living in Buffalo, N.Y. were underwater.

I've written elsewhere that I don't see a convincing or compelling economic justification for write-downs.  The more honest proponents of forced write-downs and re-financing argue it is ultimately about "fairness," not economics.  I appreciate the honesty of such a position.  If, in general, you hold a position because you feel it is "just" or "fair," you only undermine your case by trying to use shoddy economics to justify it.

But those who believe that write-downs would be "fair" need to explain why they didn't argue for write-downs when it was just the residents of Buffalo or rural Mississippi who were underwater.  Suddenly, when residents of swings states like Florida, Nevada, and Arizona are underwater, it becomes an issue of fairness. 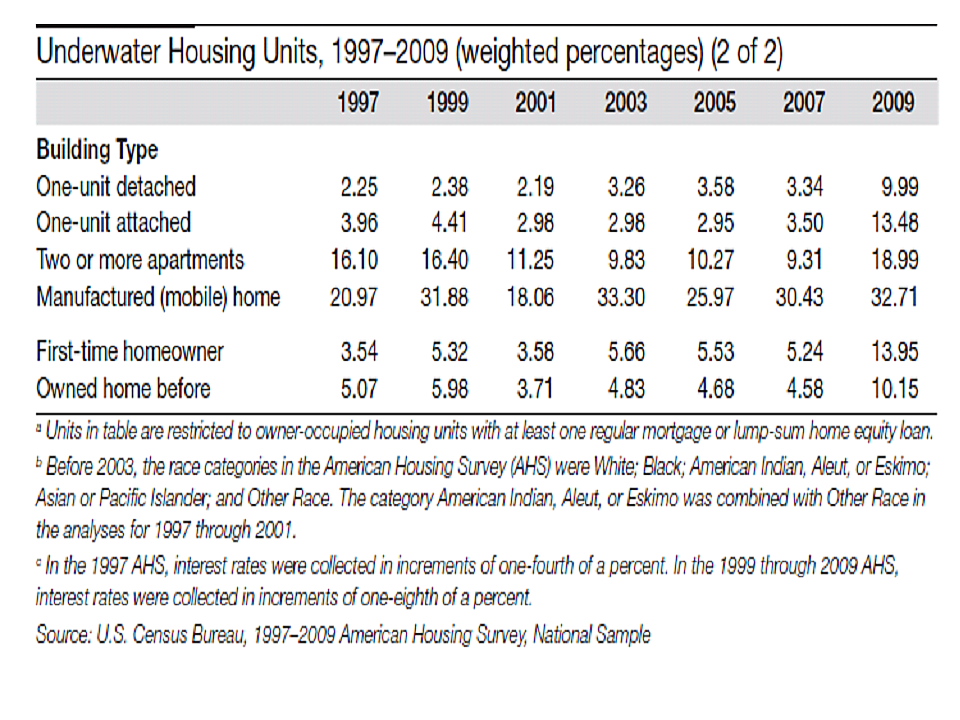