The Need for Discretionary Spending Restraint

The Obama administration released its 2015 budget this week. The budget shows federal debt held by the public falling from 74 percent of gross domestic product (GDP) this year to 69 percent by 2024. That reduction occurs even though entitlement and interest spending are projected to rise substantially as a percent of GDP.


I favor large discretionary reductions, and I have proposed many specific cuts. But does the Obama administration really favor the reductions down the road shown in its own budget? I doubt it. After all, the administration’s new spending proposals would break existing budget caps, and that would come in the wake of both parties breaking caps under the Ryan‐​Murray budget deal. So projecting declining discretionary spending in later years is an accounting ploy to make the fiscal outlook look better than it really is.


Here are the implications of the scenario, based on the CBO baseline and my calculations. Let’s suppose discretionary spending remains at the 2014 level of 6.9 percent of GDP through 2024, rather than falling to 5.2 percent as shown by CBO. That higher spending results in interest costs 0.4 percentage points of GDP higher by 2024. 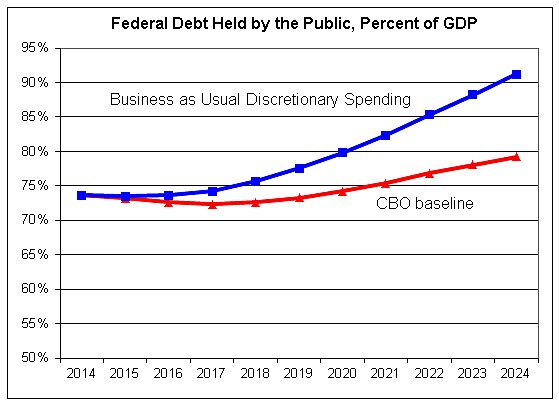 
Under the CBO baseline, federal debt rises from 74 percent of GDP today to 79 percent by 2024. But under my business as usual scenario, debt would soar to 91 percent by 2024, as shown in the chart. It would keep rising rapidly after that.


In sum, I hope that discretionary spending as a percent of GDP falls, as shown in the CBO and Obama projections. But without proactive efforts to cut and terminate programs, that may not happen. Of course, entitlement spending also needs to be cut.


However, if business as usual prevails in Washington with entitlement spending gobbling up more of GDP and discretionary spending not cut, we’ve got a really big fiscal crunch coming.