The Myth of a Manufacturing Renaissance

Have you heard all the banter about a U.S. manufacturing renaissance? Numerous media reports in recent months have breathlessly described a return of manufacturing investment from foreign shores, mostly attributing the trend to rising wages in China and the natural gas boom in the United States, both of which have rendered manufacturing state-side more competitive. Today’s Washington Post includes a whole feature section titled “U.S. Manufacturing: A Special Report,” devoted entirely to the proposition that the manufacturing sector is back!

Contrary to countless tales of its demise, U.S. manufacturing has always been strong relative to its own past and relative to other countries’ manufacturing sectors. With the exception of a handful of post-WWII recession years, U.S. manufacturing has achieved new records, year after year, with respect to output, value-added, revenues, return on investment, exports, imports, profits (usually), and numerous other metrics appropriate for evaluating the performance of the sector. The notion of U.S. manufacturing decline is simply one of the most pervasive economic myths of our time, sold to you by those who might benefit from manufacturing-friendly industrial policies with the abiding assistance of a media that sometimes struggles to distill fact from K Street speak. 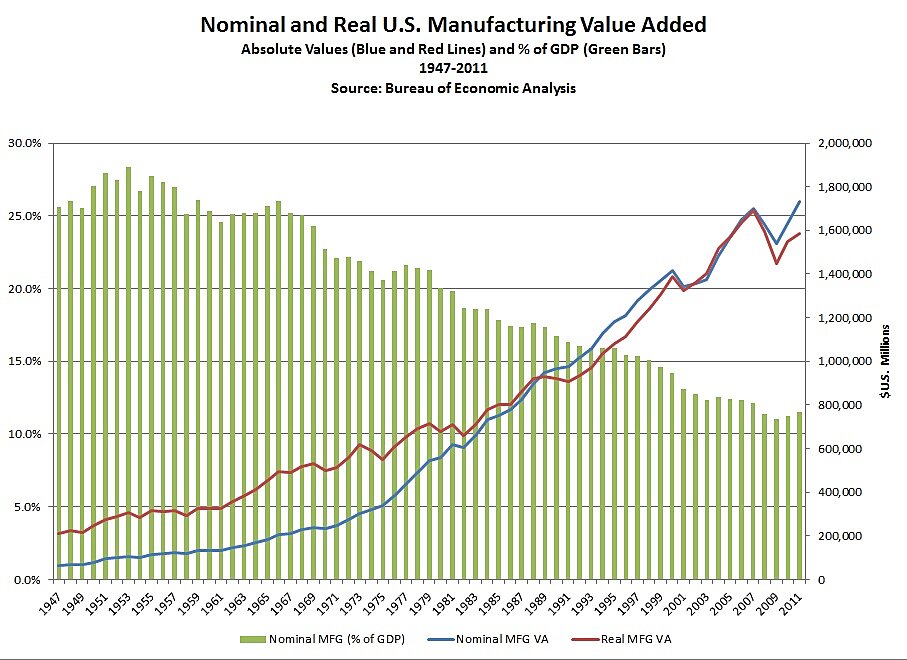 The assertion that “U.S. manufacturing is in decline” is usually presented as holy writ, without allowance for examination or dissent, before those dubious policy solutions are pitched as our only salvation. Fortunately, the more open-minded and genuinely inquisitive insist upon closely evaluating premises before considering the “therefore-we-musts.”

As a share of the U.S. economy (the green bars on the chart), manufacturing has declined from a 1953 peak of 28 percent to 11.5 percent in 2011. But that is testament to the growth of U.S. services sectors, not to a decline in manufacturing, which (as you see) has been growing nearly continuously in absolute terms.

What the media are today characterizing as a manufacturing renaissance is better understood as a surge. Things aren’t being turned around; they are accelerating in the same direction.

Plenty of manufacturing and manufacturing-related activities have been occurring and growing in the United States for several years. Rising wages in China and the domestic gas boom change the mix of relatively viable manufacturing activities, but they are just two of dozens of considerations that factor into thousands upon thousands of decisions about where to develop, test, manufacture, assemble, package, sell, and perform every other function in a products supply chain from its conception to its consumption. A confluence of considerations from worker skills, total labor costs, degree of risk aversion, desire to produce within a tariff wall, interest in influencing political decisions, infrastructure quality, proximity to lucrative markets, proximity to supply chain locations, the stability of the political and business climates, corruption, the rule of law, access to capital, taxes, regulations, and dozens more all factor into the ultimate decision about where to perform a specific manufacturing activity.

The implication that the shrinking disparity in U.S. and Chinese wages or the growing disparity between U.S. and world natural gas prices recently have surpassed magic benchmarks that will open the flood gates to foreign and returning domestic investment is an oversimplification that erroneously homogenizes manufacturing. In fact, the sector is diverse in its requirements, and thus in the weighting of factors that affect its location decisions. Every business – even in the same industry – considers different factors and weights them differently.

What matters, though, is that direct investment in the U.S. economy – whether from foreign or domestic companies – is something to celebrate. Attracting investment in manufacturing and in other sectors is essential for economic growth. Unlike previous decades when the United States was easily the destination of choice for direct investment, nowadays there is much greater competition, particularly from emerging economies. In fact, the U.S. share of the world’s foreign direct investment stock has dropped significantly from 41 percent in 1999 to 17 percent in 2011.