One of the original arguments for establishing a system of common schools was that children from different backgrounds would learn to get along with one another and become proper citizens. However, when students throw rocks at a seven-year-old boy with a rare genetic condition, call him a monster on a daily basis, and push him towards contemplating suicide, we must wonder if our public schools are actually creating good citizens.

Over 90 percent of school-aged children in the U.S. attend public schools. While it is clear that government-run schools have a nearly perfect monopoly on education funding, they do not have a monopoly on producing tolerant citizens. In fact, it isn’t even close. According to the ten experimental or quasi-experimental studies that exist on the topic, none find that public schools outperform private schools on increasing student tolerance or civic engagement. As discussed in a recent Cato Policy Forum, and shown in table 1 below, a majority of the findings reveal that private school choice programs improve civic outcomes. 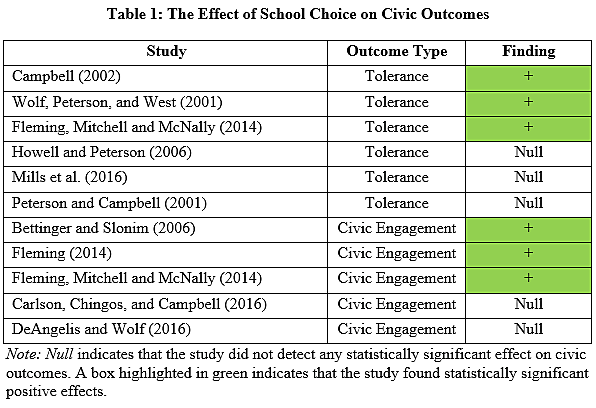 While the existing evidence may have surprised the father of the common school movement, Horace Mann, I am not all that shocked. Since it is highly costly for families to escape residentially assigned public schools that do not produce proper citizens, public school leaders do not have the incentives nor the information necessary to significantly improve character education. Alternatively, private schools must cater to families’ desires to have their children become functioning members of society.
When students engage in conversations about controversial subjects, they are more likely to understand and tolerate opposing views. But why would public school teachers – or anyone – spend much time fostering difficult debates about sensitive topics if they are incentivized to focus on standardized tests?