Twelve of the 23 Obamacare health cooperatives (CO-OPs) have shut down already. 627,000 people were enrolled in CO-OPs that ceased operations, and the federal government had disbursed more than $1.2 billion to these CO-OPs, and it might be difficult to ever recover any of these taxpayer funds. A GAO report released this week reveals that the CO-OP losses could be far from over.

4 of the 11 CO-OPs still operating in 2016 have not yet reached the benchmark of 25,000 enrollees, which CMS officials say is the minimum needed for a CO-OP to have financial solvency. More than 69,000 people were enrolled in these plans as of January 2016, and the federal government has already disbursed $265 million of the $407.8 million in loans awarded to them. The people enrolled in these plans and millions of dollars in government outlays are both at risk in the coming year. The map below, based on a figure from the report, shows how level of attrition so far, with the addition of highlighting the states where the CO-OPs have failed to reach the enrollment benchmark. 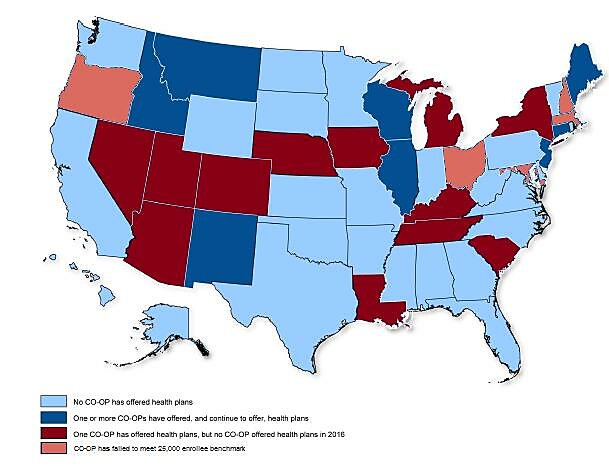 The Centers for Medicare and Medicaid Services (CMS) has determined that eight of the remaining CO-OPs face issues that are of “elevated” urgency and severity, for issues including “failing to comply with state laws and experiencing high enrollment and significant losses.” CMS has placed them under enhanced oversight and corrective action plans, but these measures are in no way an indication that these CO-OPs can be salvaged. Half of the eighteen plans under the enhanced oversight and correction plans as of last November have since ceased operations.

That’s not all: Politico Pulse obtained a letter Superintendent of the Maine Bureau of Insurance Eric Cioppa sent to CMS this week revealing that the CO-OP in that state could be on the verge of insolvency. This is striking because Maine’s CO-OP was the only one in the country to report positive income in 2014, and thought to be one of the few success stories. After enrollment gains have made the plan the largest writer of individual insurance in the state, it reported a net loss of $74 million for last year. The insurance bureau now “wants to place the co-op in receivership and cancel a random selection of the co-op's plans in order to reduce its costs.” CMS decided to oppose Cioppa’s proposal, so as of now, it will not allow him to begin deleveraging the CO-OP by removing people from the insurance rolls, and it is hard to see a path forward for the trouble plan.

Obamacare’s CO-OPs were a misguided idea from their inception, and they were criticized by everyone from Cato scholars to ardent supporters of Obamacare when they were initially being discussed. These CO-OPs had no infrastructure, no meaningful way to controls costs, and were in real danger of not being able to attain sufficient enrollment numbers to become financially viable. Their inclusion in Obamacare is another triumph of politics and intentions over rational analysis. Hundreds of thousands of people have already had to pay the price for this choice, and thousands more could join them in the increasingly likely scenario that more CO-OPs fail.