Citing new Census figures, the New York Times claims that "public school districts spent an average of $10,499 per student on elementary and secondary education in the 2009 fiscal year." But according to the most recent issue of the Digest of Education Statistics, expenditures haven't been that low for over a decade. In the last year reported, 2007-08, total expenditures per pupil in average daily attendance were already $12,922 (in 2008-09 dollars). Adjusting for inflation, that's about $13,500 in today's dollars. (Looking at spending per student enrolled, rather than per student actually taught, lowers the total figure, but not by that much).

So what gives? How can the Times claim that public school "spending" is $3,000 lower than it actually is?

They simply exclude a huge swath of expenditures in the number that they call "spending," without telling readers they have done so. Specifically, they ignore spending on things like... buildings. Correct me if I'm wrong, but I don't think American public schools have returned to Plato's practice of holding lessons in an olive grove. Until they do, they will use buildings. Buildings cost money. They aren't erected, for free and fully furnished, from the mind of Zeus.

Not only does this arbitrary and unjustifiable exclusion of capital expenditures from the reported "spending" figures wildly mislead the public about what schools are really costing them, it also misleads the public about the trends in spending. As my colleague Adam Schaeffer reveals in the chart below, spending on physical facilities has increased at a far faster rate than other expenditures (remember those Taj Mahal schools?). So by channeling David Blaine and making capital spending disappear, the Times also misrepresents real spending growth. In so doing, they undermine the public's and lawmakers' ability to make sound policy decisions regarding education. If the Times prominently corrects this glaring error I will be utterly shocked. 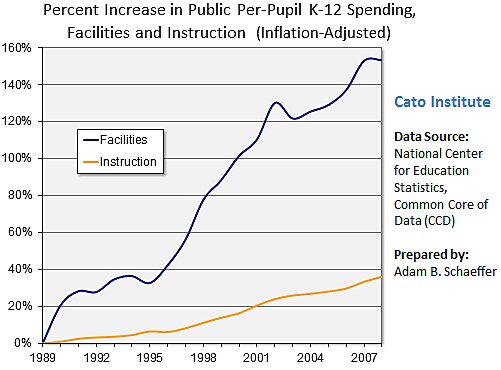