More Evidence on Coinsurance and ‘Skimping’

PHOENIX—In a recent paper on common criticisms of health savings accounts (HSAs), I discussed the concern that, since HSAs encourage greater price-sensitivity, they will encourage patients to forgo necessary medical care. I found that most of the evidence points to the opposite conclusion: Price-sensitive patients do not seem to "skimp" on necessary care.

The latest issue of Health Affairs includes an article that adds more weight to that conclusion. Dana Goldman and colleagues examined the effect of different levels of cost-sharing on privately insured patients with at least two of the following diagnoses: cancer, kidney disease, rheumatoid arthritis, and multiple sclerosis. The out-of-pocket costs for specialty drugs that treat these diseases can be quite high. For example, median out-of-pocket drug spending for cancer patients was $336 dollars (in 2004), but ran as high as $12,000 for some cancer patients.

What was striking about this study was that greater cost-sharing did not cause those patients to cut back on their drug expenditures. According to the authors:

[C]oinsurance did not significantly affect the level of spending at all once a patient initiated specialty drug use. What is most striking about these results is how inelastic demand is — that is, how insensitive patients are to price — in comparison to traditional pharmaceuticals, for which it is not uncommon to see responses of 30–50 percent when copayments double.

For emphasis, the authors include the following figure, which shows pharmaceutical spending among kidney patients as a function of the coinsurance rate: 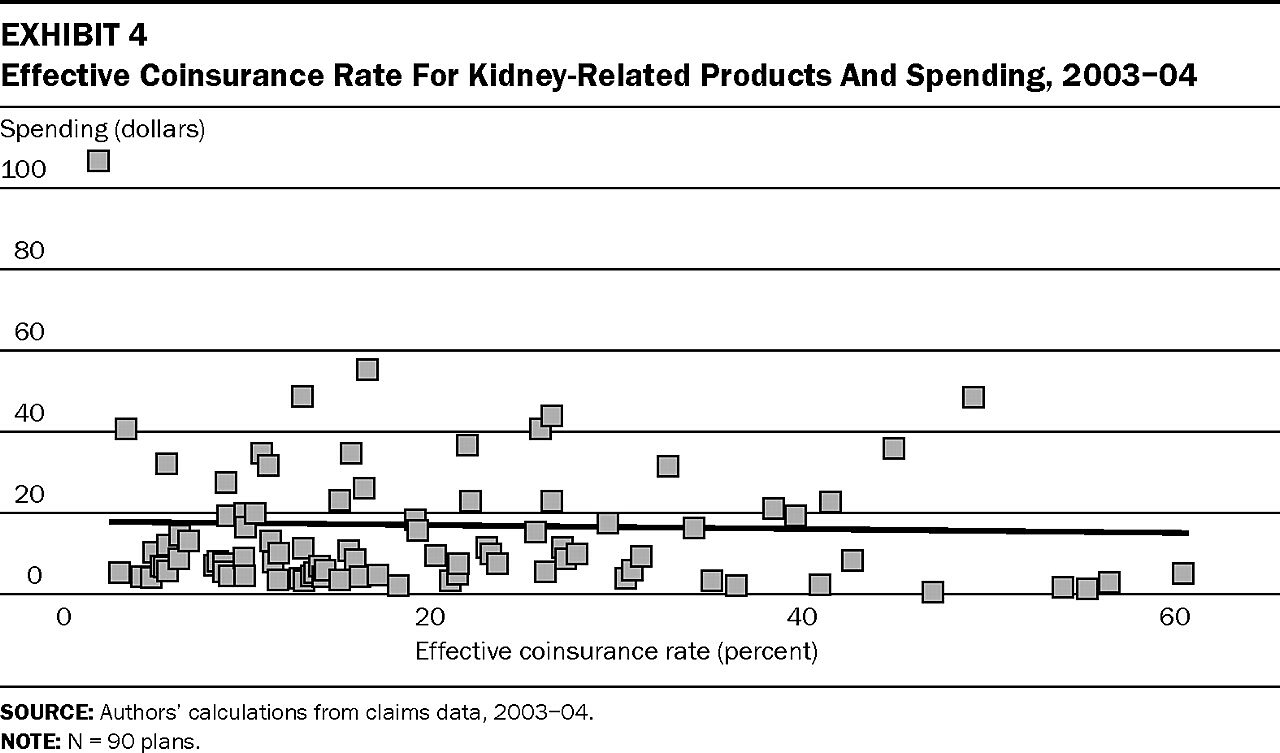 The coinsurance rate seems to have little effect, which suggests that when patients need medical care, they don't cut back when exposed to more of the cost.

Despite these results, the authors argue against greater cost-sharing for specialty drugs, both because the drugs tend not to be used by patients who would not benefit, and to protect those patients from financial hardship. Yet that recommendation does not seem to follow from their findings. First, those drugs may not be subject to overuse at present. However, as the authors recognize, the market for specialty drugs is set to expand dramatically, which increases the potential for moral hazard when cost-sharing is low. Second, if those patients are suffering serious financial hardship, it isn’t apparent from this study: They are still able to obtain the drugs they need.

The authors seem to have a preference for pooling the cost of specialty drugs — which is fine. Personally, I’m agnostic: I think consumers should make that choice according to their own preferences. But this study's empirical results do not illuminate whether it is better to have individual patients bear those costs, or to have those costs borne by the entire insurance pool — an option that could possibly make coverage unaffordable for other patients, whether now or in the future.