The Misery Index: A Look Back at Bulgaria’s Elections

With Bulgaria’s May 12th election fast approaching, it is useful to reflect on past elections and the resulting economic performance of each elected government. To do this, I have developed a Misery Index inspired by the late Prof. Arthur Okun, a distinguished economist who served as an adviser to U.S. President Lyndon Johnson. 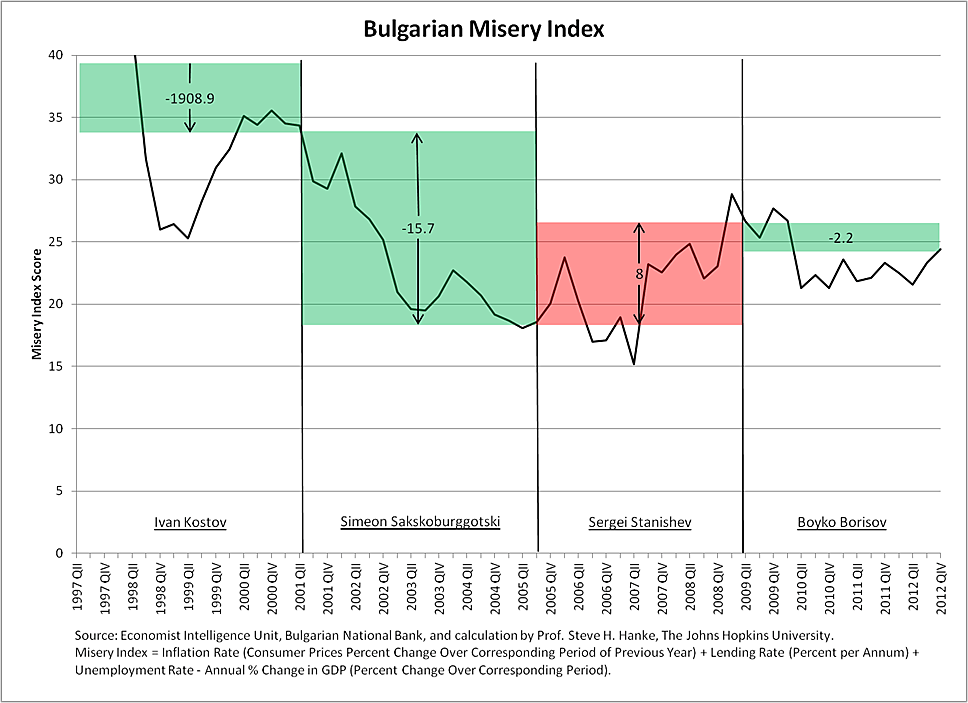 The Socialist Party government of Prime Minister Zhan Videnov created hyperinflation and a lot of misery. The Misery Index under the Videnov government’s watch peaked at 2138 in the first quarter of 1997. That number isn’t shown on the accompanying chart—if it was, the chart would take up an entire page of Trud.

So, the chart starts in the second quarter of 1997, with the Kostov government. Shortly after Kostov took power, Bulgaria installed a Currency Board System, based on a draft Currency Board Law, which I authored at the request of President Petar Stoyanov. The Currency Board brought an end to Bulgaria’s hyperinflation, which peaked with a monthly inflation rate of 242%, in February 1997.

The National Movement Simeon II replaced the Kostov government and made further progress in bringing down Bulgaria’s Misery Index score.

So, while the Borisov government did not do much to reduce Bulgaria’s Misery Index score (improve economic conditions), it still succeeded in shielding Bulgaria from the economic misery being experienced by the rest of Europe.

What can we learn from this look at the economic records of past post-communist Bulgarian governments? First, the key to the massive improvement in the Misery Index under the Kostov Government was the implementation of Bulgaria’s Currency Board. Second, every time a socialist government has assumed power in Bulgaria, economic misery has increased. Third, while the Borisov government didn’t do much to improve Bulgaria’s Misery Index score, things could have been worse, when compared to the rest of Europe.

In short, while the rest of Europe was sinking, the Borisov government just managed to hold its head above water.

This article was originally published in the Bulgarian newspaper Trud.