The day before yesterday, The Washington Post ran a piece with the alarming headline, “The middle class is shrinking just about everywhere in America.” Although you wouldn’t know it from the first few paragraphs, a shrinking middle class isn’t necessarily a bad thing. As Human​Progress​.org Advisory Board member Mark Perry has pointed out, America’s middle class is disappearing primarily because people are moving into higher income groups, not falling into poverty. 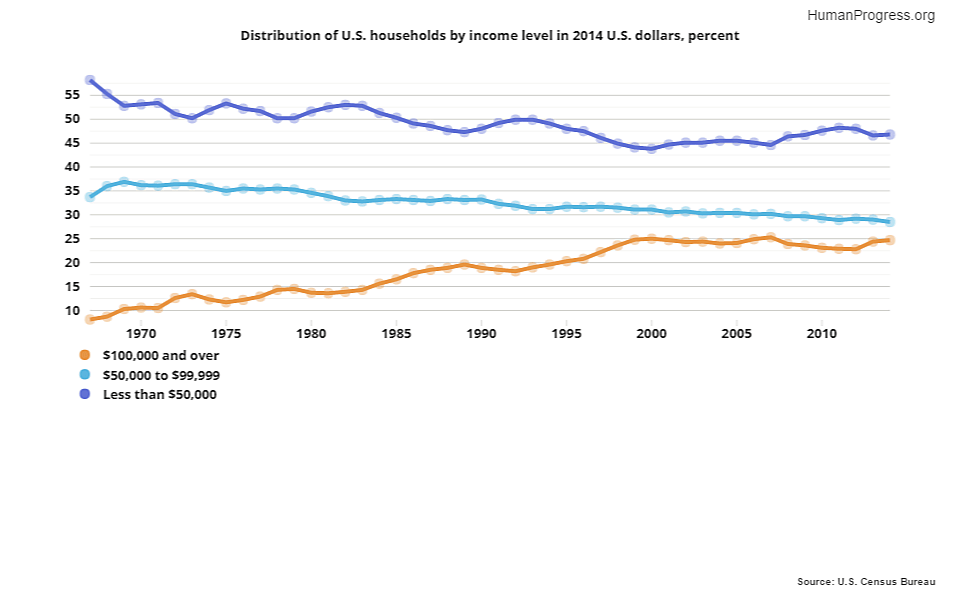 
According to the Pew Research Center, 11% fewer Americans were middle class in 2015 than in 1971, because 7% moved into higher income groups and 4% moved into lower income groups. The share of Americans in the upper middle and highest income tiers rose from 14% in 1971 to 21% in 2015.


One has to read fairly far into the Washington Post’s coverage before seeing any mention of the fact that a shrinking middle class can mean growing incomes:

“[In many] places, the shrinking middle class is actually a sign of economic gains, as more people who were once middle class have joined the ranks at the top. [For example, in] the Washington, D.C. metropolitan area, the share of adults living in lower‐​income households has actually held steady [from 2000 to 2014]. The households disappearing from the middle‐​class, rather, are reflected in the growing numbers at the top.”

Other cities with a shrinking middle class, a growing upper class and very little change in the lower class include New York, San Francisco and New Orleans. So the next time you hear someone bemoan the “shrinking middle class,” take a closer look at the data and keep in mind that it may actually be a sign of growing prosperity.