The murder rate in Mexico is a serious and troubling issue that I’m frequently asked about in relation to immigration. Although far lower than in other Central American countries, the Mexican murder rate is almost three times as high as it was in 2007 – and potentially much higher. But, do unauthorized Mexican immigrants come to the United States to avoid the violence in their home country?

I decided to plot the number of Mexican nationals apprehended by Customs and Border Protection (CBP) on the left axis, an admittedly imperfect measurement of the intensity of unauthorized immigration, and the murder rate in Mexico per 100,000 people on the right axis.

If violence was driving emigration from Mexico, we'd probably be seeing more of it instead of less.

Some readers might be thinking that apprehensions on the border were down because the U.S. government is enforcing immigration laws less vigorously – a common but incorrect claim. From 2000 to 2012, appropriations for the Border Patrol increased from $1 billion annually to $3.5 billion, the number of border patrol agents on the Southwest border increased by almost 10,000, and marijuana seizures increased by almost 1,000,000 pounds annually. The concurrent decrease in immigrant apprehensions and increase in marijuana seizures indicates that the former are down for reasons other than a slacking border enforcement. 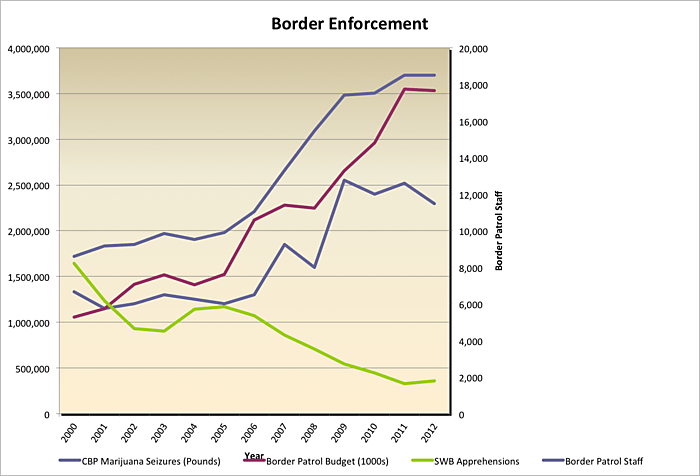 Although some individuals have certainly been driven out of Mexico and into the United States because of violence south of the border, it does not appear to be a main driver of those movements.