Meet the Press, Check the Facts

This Sunday (2 December 2012), David Gregory hosted a lively session of NBC’s Meet the Press. The focus of Sunday’s program was the so-called Fiscal Cliff. Gregory rounded up many of the usual Washington suspects, including Treasury Secretary Timothy Geithner, and drilled them on their talking points.

Several times, in the course of Gregory’s questioning, he referred to President Bill Clinton’s tough 1993 budget deal. Throughout the broadcast, Gregory kept stressing the fact that the 1993 deal included defense cuts. For Gregory, those cuts were the flavor of the day.

This isn’t surprising. Indeed, most members of Washington’s chattering classes parrot the line that the economy boomed during the Clinton years because Clinton was the beneficiary of the so-called peace dividend, which allowed him to cut defense expenditures.

In fact, if we look carefully at the federal budget numbers, while Clinton did cut defense expenditures, as a percent of GDP, the majority of the Clinton squeeze came from non-defense expenditures. Indeed, as can be seen in the accompanying table, the non-defense squeeze accounted for 2.2 percentage points of President Clinton's 3.9 total percentage point reduction in the relative size of the federal government. 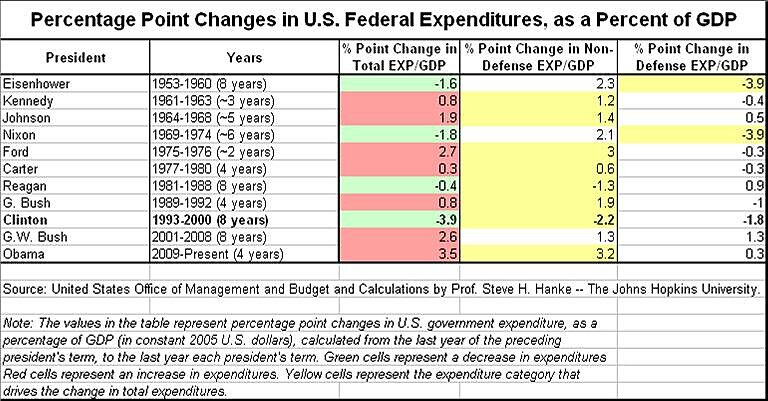 Clinton squeezed the budget and squeezed hard, from all major angles. This was a case in which a president’s actions actually matched his rhetoric. Recall that, in his 1996 State of the Union address, he declared that "the era of big government is over."

Clinton’s 1993 deal marked the beginning of the most dramatic decline in the federal government's share of the U.S. economy since Harry Truman left office. The Clinton administration reduced government expenditures, as a percent of GDP, by 3.9 percentage points. Since 1952, no other president has even come close. At the end of his second term, President Clinton's big squeeze left the size of government, as a percent of GDP, at 18.2 percent—the lowest level since 1966.

The table contains the facts. President Clinton knew how to squeeze both defense and non-defense federal expenditures. Indeed, he squeezed non-defense a bit harder than defense. Since 1952, the only other president who has been able to reduce the relative share of non-defense expenditures was Ronald Reagan. Forget the “peace dividend”—it’s all about the Clinton “squeeze dividend.”