A recent outbreak of measles at the Eloy Detention Center has raised some concerns over disease and immigration. The disease was carried in by an immigrant who was detained, allowing it to spread among some of the guards who were not vaccinated. The Detention Center has since claimed that it vaccinates all migrants who are there and is working on getting all of its employees vaccinated. Regardless, how much should we worry about measles brought in by unvaccinated immigrants? Very little.


First, measles vaccines are highly effective at containing the disease. There are two primary measles vaccinations. The first is the MCV-1 which should be administered to children between the ages of nine months and one year. MCV-2 vaccinations are administered later, at the age of 15 to 18 months in countries where measles actively spreads. In countries with very few cases of measles, like the United States, the MCV-2 is optional and is not typically administered until the child begins schooling.


However, the U.S. government’s vaccination requirements indicate that unauthorized immigrants are possibly less likely to be immunized than legal immigrants. One way to increase vaccination rates among all immigrants, legal and illegal, would be to make green cards available to immigrants who are more likely to come unlawfully, thus guaranteeing that they are vaccinated. 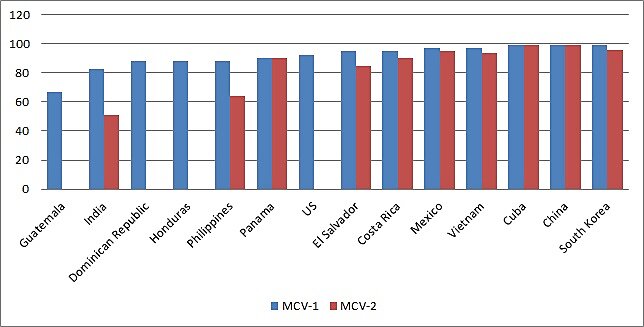 
In a more worrying trend, vaccine refusal rates are up among the native‐​born Americans in wealthy enclaves in California.