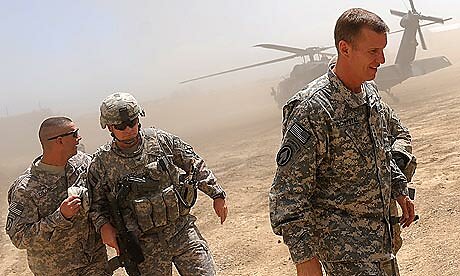 In his review of the war in Afghanistan, states that “failure to gain the initiative and reverse insurgent momentum in the near‐​term (next 12 months)—while Afghan security capacity matures—risks an outcome where defeating the insurgency is no longer possible.”


I would hope that Congress and the American people hold McChrystal to his “12 month” prediction, because if President Obama sticks to McChrystal’s ambitious strategy, U.S. forces could remain in Central Asia for decades.


McChrystal argues that the U.S. military must devote more effort to interacting with the local population and elevating the importance of governance. How? Does America defeat the Taliban in order to build an Afghan state, or does America build an Afghan state in order to defeat the Taliban? Winning the support of the population through a substantial investment in civilian reconstruction cannot take place without some semblance of stability on the ground. The mission’s multi‐​disciplinary approach (“an integrated civilian‐​military counterinsurgency campaign”) is understandable, but oftentimes its feasibility is simply assumed.


Unfortunately, the United States has drifted into an amorphous nation building mission with unlimited scope and unlimited duration. Our objective must be narrowed to disrupting al Qaeda. To accomplish that goal, America does not need to transform Afghanistan into a stable, modern, democratic society with a strong central government in Kabul—or forcibly democratize the country, as our current mission would have us do, or as McChrystal states “Elevat[ing] the importance of governance.” These goals cannot be achieved at a reasonable cost in blood and treasure in a reasonable amount of time—let alone the next 12 months.

Growing and improving the effectiveness of the Afghan National Security Forces (ANSF) seems limited and feasible. A focused mission of training the ANSF means America must support, rather than supplant, indigenous security efforts. Training should be tied to clear metrics, such as assessing whether some Afghan units can operate independent of coalition forces and can take the lead in operations against insurgents. Training the ANSF is not a panacea, and I go through its potential problems here in a Cato white paper.


Denying a sanctuary to terrorists who seek to attack the United States does not require Washington to pacify the entire country or sustain a long‐​term, large‐​scale military presence in Central Asia. Today, we can target al Qaeda where they do emerge via air strikes and covert raids. The group poses a manageable security problem, not an existential threat to America. Committing still more troops would feed the perception of a foreign occupation, weaken the authority of Afghan leaders, and undermine the U.S.‘s ability to deal with security challenges elsewhere in the world.