Susana Martinez of New Mexico has gained the highest score on the “Fiscal Report Card on America’s Governors 2018.” She is the first woman to achieve the distinction since Cato began producing the reports in 1992.


Over eight years in office, Governor Martinez has restrained state spending, cut taxes, and vetoed tax hikes. She also scored well on Cato reports in 2014 and 2016.


The governors report assigns grades based on a calculated score between 0 and 100. Higher scores indicate more focus on cutting taxes and restraining spending. Cato has used the same methodology since 2008.


Martinez’s achievement stands out because men governors score slightly higher, on average, than women governors. Since 2008 the Cato reports have assigned 276 scores—6 reports and an average 46 governors per report. There were 242 men and 34 women. The average score for the men was 51 and for the women 49. Interestingly, the men’s scores tended to be more extreme low and high, while the women were more bunched toward the middle score of 50.


The chart shows that party is a more important factor in determining fiscal conservatism than gender. Both men and women Republican governors averaged substantially higher scores than Democratic governors. Martinez received a score of 73. 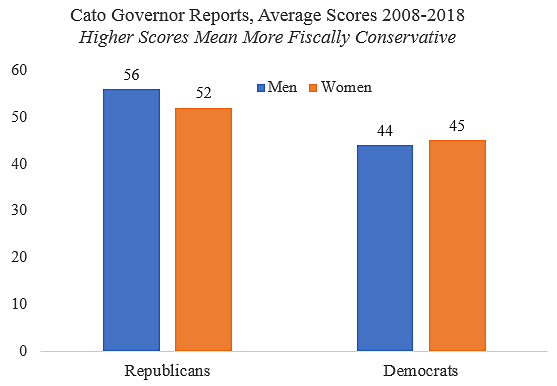