However, it was privatization that became Thatcher’s most important and enduring economic legacy. She popularized the word privatization and oversaw the sale to the public of British Airways, British Telecom, British Steel, and British Gas, and other major businesses.


Spurred by the success of Thatcher’s reforms, privatization swept the world. Governments in more than 100 countries moved thousands of state‐​owned businesses to the private sector. Since the Iron Lady’s campaign to give ownership of Britain’s economy back to the people, more than $3.3 trillion of government businesses have been privatized around the world.


I take a look back at Thatcher’s privatization reforms in this month’s Cato Journal.


What is the relevance for U.S. policymaking today? Many types of businesses that Britain privatized are still partly or fully owned by governments in this country, including airports, seaports, postal services, air traffic control, electric utilities, and passenger rail. So there is an opportunity here for our leaders to spur growth and innovation by adopting Thatcher’s playbook.


But privatization is important for more than just the economic benefits. Thatcher said privatization is also about “reclaiming territory for freedom” and ensuring that “the state’s power is reduced and the power of the people enhanced.”


In toasting Margaret Thatcher in Washington, February 27, 1981, President Ronald Reagan said “everywhere one looks these days the cult of the state is dying.” Thatcher’s privatization program would help make that promise come true.


The photo shows the free‐​market friends at the White House, February 28, 1981. 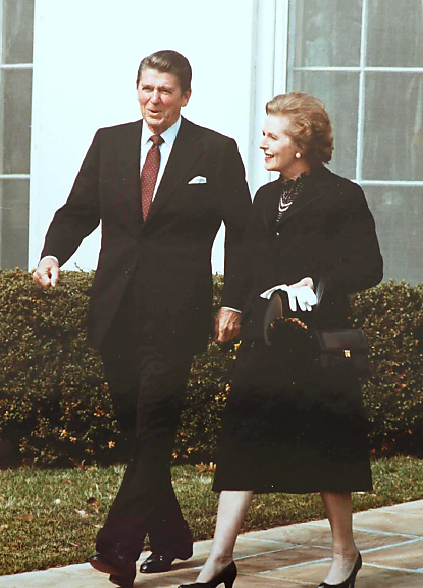