Last week, the Associated Press reported that more than 9,000 food stamp recipients in Maine have been removed from the program because they failed to comply with the program’s work requirements. These requirements themselves are largely nothing new, but in the years since the recession, almost every state received a waiver exempting them from these provisions. By allowing the waiver to lapse, Maine will again enforce the requirement that able-bodied adults without dependents participate in some form of work activity. These rules only apply to a small fraction of beneficiaries, just 10 percent of Maine’s beneficiaries in 2013. A spokesman for the Maine Department of Health and Human Services revealed that the number of SNAP beneficiaries subject to the reinstated requirements has fallen from roughly 12,000 to 2,680. This is a steep reduction, but relatively small compared to the 250,000 people in the Supplemental Nutrition Assistance Program (SNAP) when the rule change went into effect.

Even before the recession, the percentage of Maine households in the program surged from 9.6 percent in 2002 to 12.3 percent in 2007. The recession caused the beneficiary rolls to swell even further, and they have continued to grow in the years since, in part due to the waiver. In 2013, 18 percent of Maine households participated in SNAP, third highest in the country. As the figure shows, since October 2010, Maine’s unemployment rate has fallen significantly, but the number of SNAP recipients remains elevated. Since the enforcement of the new rules began, these two measures have been more highly correlated. 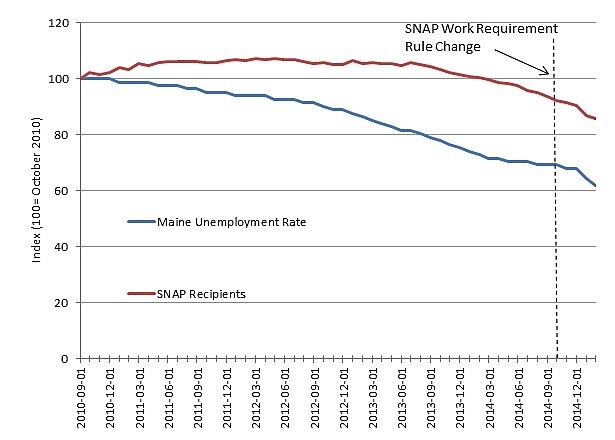 Some advocates for the poor have raised concerns that there are not enough jobs available, so even willing beneficiaries might be disqualified. Looking at the broad array of activities that meet the work requirements could allay some of these fears. As the state’s Employment and Training Plan explains, the requirements are “very broad” and include aspects like job training, assisted job search and education, in addition to traditional work. Beneficiaries who volunteer for 24 hours a month would also meet these requirements.

Part of the motivation for this renewed enforcement is to provide a better path for beneficiaries to transition off  the program and back into the mainstream economy. Many beneficiaries are on the program for extended periods of time, and for too many, next to nothing is being done to help them improve their employment prospects during this time. A recent national study found that, over a 56 month period, a full quarter of beneficiaries participated for more than four years. Some of these people are exempt due to disability status or age, but those with the capacity for work are not really helped by a program that leads them to languish for years on the welfare rolls.

Reinstating enforcement SNAP’s work requirements will not drastically change the entire anti-poverty regime. SNAP is just one small (but growing) component of the welfare system, and these requirements only apply to a small fraction of those beneficiary households. Those caveats aside, Maine’s renewed focus on work requirements is an improvement and will help more people transition out of the program and into work, where they are much more likely to flourish.