Looking in the Wrong Places for Social Security Reform

Democratic Vice Presidential nominee Tim Kaine suggested in the debate last week that a Clinton administration would address Social Security’s unsustainable fiscal trajectory by “focusing primarily on the payroll tax cap,” increasing it substantially from its current ceiling of $118,500. Proposals along these lines portray raising the tax cap as a way to address the rapidly deteriorating fiscal health of the program by enacting a modest tweak that would simply return the program to the way it has always operated, and that this additional tax burden would fall solely on high-earners. However, the current cap is not significantly out of line with the program’s historical experience, and the U.S. has a relatively high taxable maximum compared to many peers. These factors, along with the resulting adverse economic consequences and the need for further increases in the future, illustrate why the focus on this aspect of reform is misplaced.

It’s certainly true that at some points in the program’s history, a significant portion of workers had earnings above the tax cap, but this was in the earlier years of the its operation when more than a quarter of workers were above it. Over the past 30 years this share of workers has fluctuated in a narrow band around 6 percent.

Looking at it another way, the percentage of total earnings that are subject to the tax was 82.7 percent in 2014. While this is slightly below the high point in the early 1980s, it is just below the average since 1950. 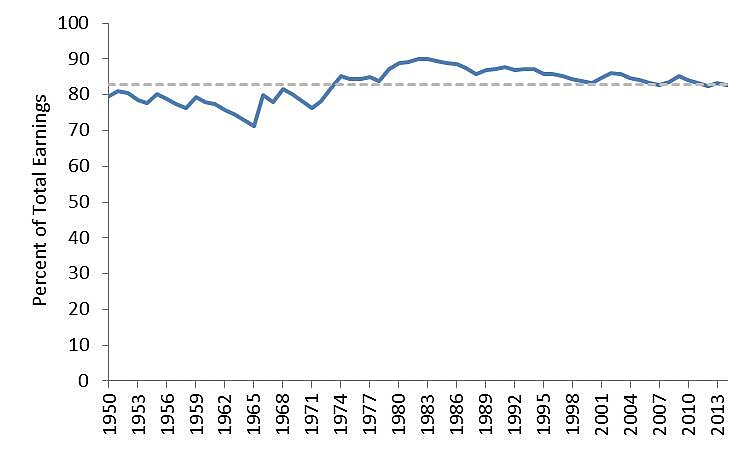 So in neither of these comparisons has there been a recent drastic departure from the past history of Social Security: both the percentage of earnings covered and the percent of people with earnings below the cap are broadly in line with historical averages. 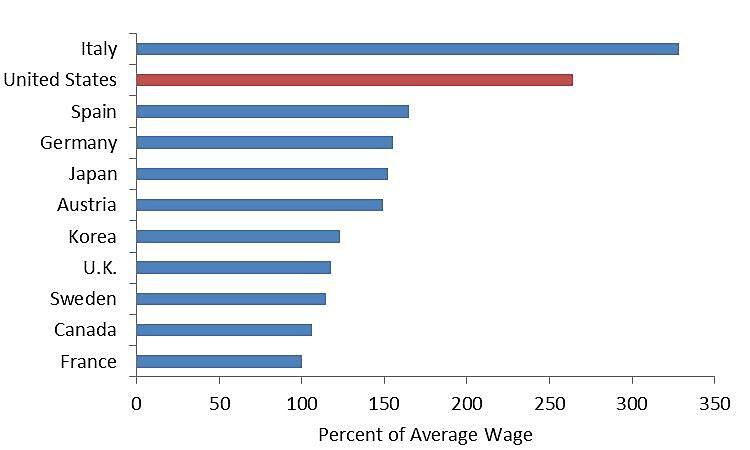 There are only four countries without a taxable maximum out of the 23 countries included in areport from the Organization for Economic Co-operation and Development (OECD), Czech Republic, Finland, Estonia, and Portugal. Of the remaining 19, the average taxable maximum for pensions was only 184 percent of the country’s average wage, far below the 264 percent in the United States. Italy was the only major country with a pension ceiling significantly above the United States in 2014, and countries so often cited as a model for their welfare states like Canada (106 percent) and Sweden (115 percent) had a ceiling barely above the average wage.

Substantially increasing the tax cap, or removing it completely, is far from the modest tweak that would be-reformers portray it as, and would be a significant and burdensome tax increase that would lead to a number of negative economic responses. And it’s not just “the rich” who will face these higher taxes: roughly 20 percent of current and future covered workers are projected to earn more than the taxable maximum at some point in their lives, and almost 40 percent of beneficiaries in 2050 ever earning above the taxable maximum aren’t in the highest quintile of lifetime earnings, according to projections from the Social Security Administration.

It is also very unlikely that the initial increase in the tax cap would be the final word because it would only be a stopgap measure, and significant annual cash flow deficits would return before long. These shortfalls would then require another round of reform, and more calls to either raise the cap further or increase the 12.4 percent tax rate. This is actually in line with the history of Social Security, albeit in an unfortunate way: a 1936 pamphlet from the Social Security Administration assured people that by 1949 the 6 percent total tax rate up to a cap of $3,000 per year would be “the most you will ever have to pay.”

Social Security is in serious need of reform and delays will only increase the magnitude of the changes needed, but raising or eliminating the payroll tax cap is the wrong way to go about it.