Lessons for the Opioid Epidemic from Meth

As the nation remains fixated on the opioid epidemic, methamphetamine is making a resurgence. Meth is less expensive than heroin, and it is gaining users who fear opioid overdoses.


Meth is not new; it burst onto the scene in the early 1990, as the crack epidemic waned. Synthesized from readily available chemicals, meth provided a cheaper, homemade alternative to other drugs. As use increased, legislators and law enforcement officials took note.


The first major legislation targeting meth was the 1996 Comprehensive Methamphetamine Control Act. Passed unanimously by the Senate and by 386–34 in the House, the legislation required that individuals buying and selling chemicals used in meth production register with the federal government, which sought to track such chemicals and reduce their supply to manufactures.


Despite this legislation, meth use – and fatal overdoses – increased. In response, Congress passed the Combat Methamphetamine Epidemic Act of 2005 (officially enacted in March 2006), which limited over‐​the‐​counter sales of ephedrine and pseudoephedrine, and required retailers to log customer purchase of such drugs. Simultaneously, federal and state authorities were instituting restrictions on pharmaceutical amphetamines including Ritalin and Adderall. And many states instituted prescription drug monitoring programs to reduce the availability of prescription amphetamines acquired legally and resold on the black market.


While well‐​intentioned, these policies may have induced users to substitute from expensive prescription drugs to cheap, readily available meth. And this switch had the usual impact of restrictions on access.


Overdose deaths related to methamphetamine initially declined after the crackdown on prescription access, but by 2016, the meth overdose rate had reached four times its level a decade ago. The likely explanation is that restrictions pushed users from prescription versions to black market meth, where uncertainty about purity generated increasing overdoses. 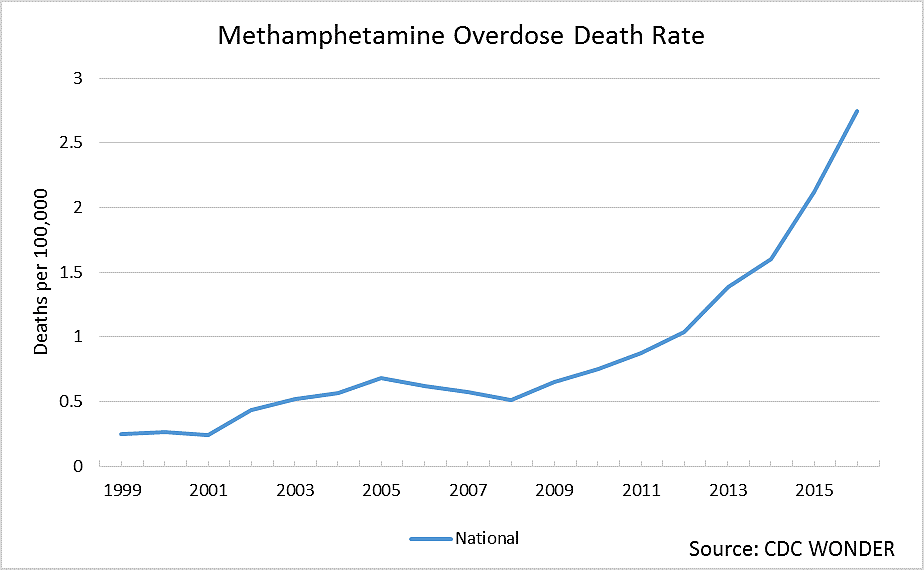 As the opioid crisis worsens and calls for supply restrictions increase, policymakers should consider how the same approach failed to halt – indeed exacerbated – the meth epidemic.