Below is a chart of real (inflation‐​adjusted) personal consumption and civilian employment from January 2007 to December 2010. Let’s recall that Lehman’s failure was in September 2008. What should be immediately clear, even to such an accomplished economist as Blinder, is that both consumption and employment began their decline almost a full year before Lehman’s collapse. So unless Lehman’s collapse caused some backward ripple in time, it’s hard to see how it triggered the recession. In fact, about 75% of the decline in personal consumption preceded the Lehman collapse. Also of interest is that the rate of decline in consumption actually slowed after the Lehman collapse.


Why is this important, other than my obsession with facts? As long as we allow the narrative to run that Lehman’s collapse caused the crisis, then “solutions” like Dodd‐​Frank will continue to dominate the debate, rather than recognizing a housing bubble drove the crisis and that we should instead be focused on preventing the creation of housing bubbles. And don’t get me wrong; Lehman got what they had coming. If anything, their well‐​deserved fate should have been shared by others. 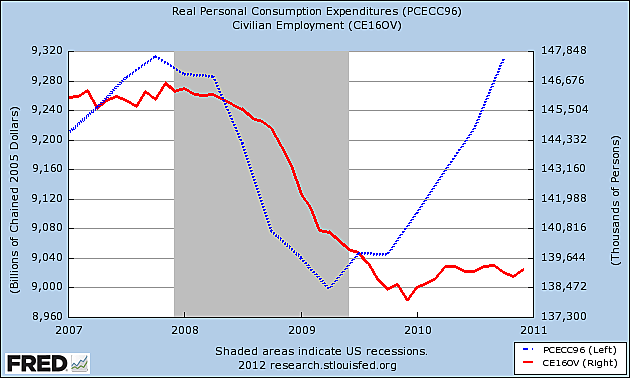